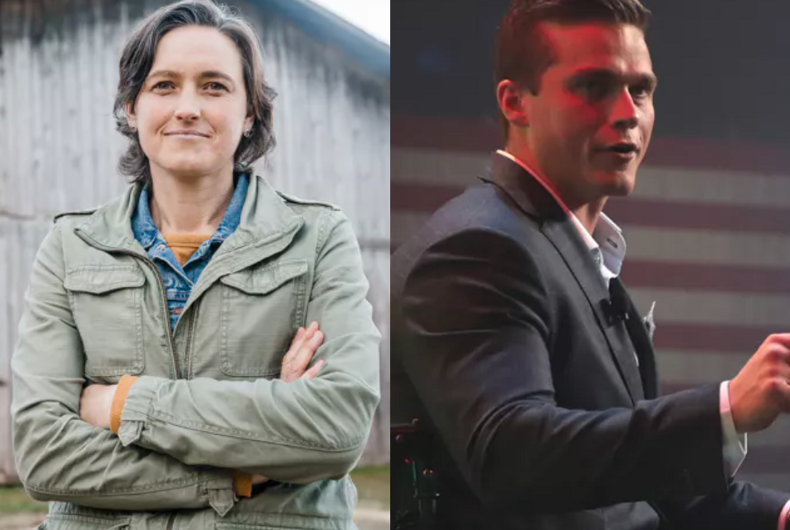 The AP called the race last night as Edwards had over 33% of the vote and Cawthorn had just under 32% of the vote. Cawthorn reportedly conceded to Edwards last night.

In the Democratic primary, Beach-Ferrara won with almost 60% of the vote, far ahead of all the other candidates. She said on social media that she’s “honored” to be the candidate for North Carolina’s 11th Congressional District and thanked volunteers, supporters, and voters.

Cawthorn made a name for himself as one of the most extreme Republicans in Congress ever since social media posts of him happily visiting Adolf Hitler’s vacation residence and calling the Nazi leader “the Fuhrer” were leaked shortly after he won the 2020 election. He was also caught lying about having been accepted to the U.S. Naval Academy.

Women who went to Patrick Henry College came forward and accused him of taking female students on “fun drives,” where he would drive recklessness and ask them intrusive questions about their sex lives.

Over the last two months, embarrassing videos and photos of Cawthorn were leaked to the media, showing him in women’s lingerie, naked and humping a friend’s face, and having a staffer – who he said was his cousin – grab his genitalia in a car.

Cawthorn tried to respond to the various leaked images in a long, rambling video he posted to Twitter.

“You are witnessing one of the first examples of a politician who grew up with a cell phone in their hand,” he said in the video. “Most of my colleagues in Congress right now would not be serving in Washington if they grew up within a single mile of a cell phone growing up.”

Cawthorn is an anti-LGBTQ extremist, saying that he has “traditional views” when asked about marriage equality. He also opposed the Equality Act, which would add sexual orientation and gender identity to federal civil rights legislation, because he claimed that it would fund abortion and take away parents’ rights to prevent their transgender children from transitioning, neither of which is true.

Beach-Ferrara, who is a Christian minister with a background in LGBTQ advocacy, told LGBTQ Nation last year that she is trying to bring people together, unlike Cawthorn.

“I think part of being an LGBTQ person who is…really proud to be a Southerner is about how we navigate who we are in our public lives,” she said, “and there has historically been so much pressure for folks to stay closeted or opaque, and my faith teaches me to show you as I am and to try to meet people as they are… What we’re trying to do is create a campaign where everyone is welcome at the table and everyone can see themselves as a leader in our community.”

Beach-Ferrara had some hard words for Cawthorn at the time – saying he “has trafficked in really reckless and dangerous conspiracy theories” and “helped incite a violent insurrection” – but now she’ll face off against Edwards in the general election in November.

I am honored to be the Democratic Nominee in NC-11! Thank you to all of our volunteers, supporters, and everyone who voted. I am fired up to get out and organize with you as we build to a victory in November. Chip in: https://t.co/lZfRkLtc7e pic.twitter.com/HOIl3i9McR

How this bookstore launched an entire Spanish gayborhood