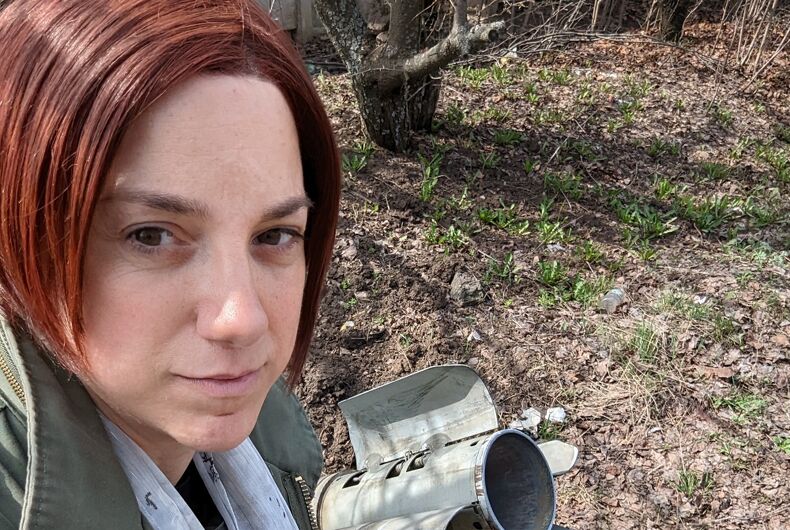 My decision to transition took place while in the midst of reading the classic George Orwell opus on war: Homage to Catalonia.

Having been on and off feminizing hormones for the previous nine months, it was in Barcelona when I called my best friend and told her that my 35-year wait to embrace myself was finally ending.

Related: The worst part of traveling while gay

Barcelona was also the city where Orwell’s personal narrative of fighting for a foreign nation in combat took place.

When coupled with other works on conflict by literary luminaries from the past including Faulkner and Hemingway, I’d come to appreciate the skill seemingly necessary when trying to write under such conditions and respected the apparent sacrifices that came with their tales.

Almost three years after that May 2019 phone call took place, I too am experiencing the conditions faced by the writers named above. However a different realization has taken place in the midst of the Russian invasion of Ukraine, and my time spent here on the front lines.

That reality has imbued me with a new perspective on life as a writer, a transgender female and a minority in general, one that, no doubt, many others realized as part of their own existence well before I did in mine.

Put bluntly, the danger and microaggressions that non-cis, non-hetero, non-white, non-males face in the United States is the same as being in a European ground war.

The comparison is apt for several reasons.

After decamping to the northeast Ukrainian battlefront for the last month and counting, I understood with stark clarity that ever since announcing the decision to live as my most authentic self, I had been faced with the same obstacles I’m encountering here including the need to exhaustively be on guard against danger, to prove myself over and over as an outsider, and to wake up wondering every morning if this is the day I’ll die.

Having lived as a cishet white male for the vast majority of my life, the risks faced by those who blazed the pathways for my own success had always been a concept which eluded me.

In recognizing the physical, mental, and emotional similarities which exist between the two spaces, I finally accepted that whatever privilege I’d previously enjoyed had long since dissipated. Furthermore, in spending the last few years compartmentalizing the slights, bigotry, and prejudice directed towards me, I was unable to fully grasp the constant struggle too many others are forced to endure.

Being a party to an actual, defined war has forever rendered my unintended ignorance moot.

In addition to making me aware of societal hostility, and the ramifications surrounding it, living among constant shelling, rocket attacks, and machine gun fire has also made me further consider why bloodshed, and the scent of ever looming death, may have creatively driven the authors I previously mentioned.

My current belief is that for those men, whose lives were otherwise bland, pedestrian, and without racial-, ethnic-, or gender-based burdens, seeking out the ultimate confrontation allowed for them to feel alive and stare at death.

For many who are minorities, every day brings a slight twist on that challenge: we avoid death, while hoping to grasp life.

With #Letters4TransKids, Ina Fried is Reminding Trans Kids They Have a Future