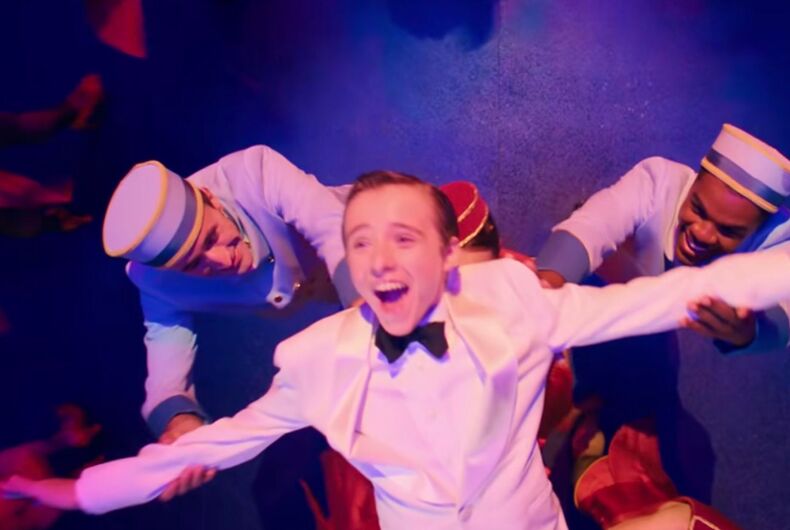 As Disney remains at the center of the outcry over Florida’s “Don’t Say Gay” bill, a new and reportedly very gay Disney movie has everyone talking.

At the center of Disney Plus’s “Better Nate Than Ever” is 13-year-old Nate, a flashy and spirited kid who dreams of being on Broadway. While it is implied that Nate is gay, it is never explicitly mentioned. The film’s writer and director, Tim Federle – who also wrote the novel the movie is based on – said there’s a reason for that.

“I’m not sure how many things are overt when you’re 13,” he told WCMY. “So when I was 13, I knew I was different, and I knew that I was probably trending toward identifying as gay. I certainly wasn’t ready to say the word out loud.”

“If it’s a word that some people are still afraid to say, then certainly when you were at your most vulnerable, which for many of us is when you’re in seventh grade, you’re going to be really careful with how far you put yourself out there,” he continued. “So I see Nate’s journey in the movie as taking a step toward who he will become.”

Despite Nate’s sexuality not being directly addressed, the Daily Beast said the film “may be the most gay-positive and encouraging youth programming that Disney has ever released,” pointing out the “bizarre” timing with all the controversy surrounding Disney.

Federle spoke directly to this timing, discussing how he felt about releasing the film amidst Florida’s passage of the “Don’t Say Gay” bill – which Gov. Ron DeSantis (R) signed on Monday – as well as the backlash toward Disney’s initial lackluster response to speaking out against it.

“For me, who didn’t grow up with a movie like this, I know this movie would have made me feel seen and a lot less alone,” Federle told Variety. “Ultimately, good representation does not cancel out bad legislation. And what I’m hopeful for is that these first steps Disney’s taking now are only the first steps towards making the world a truly safer and more inclusive space.”

He also praised Disney employees for speaking out and “saying enough is enough” after CEO Bob Chapek first refused to take a public stance against the bill. Later, Pixar employees released a letter accusing Disney of censoring queer content. Federle said he supports anyone standing up for more inclusion and added that this whole experience has been “interesting” because he felt complete creative freedom in making “Better Nate Than Ever.”

“This movie is one that has not a moment censored; it is truly the movie I wanted to make. So I’m hoping the company is starting to take real steps toward broader inclusion and a more transparent process of how they make content.”

Disney has been embroiled in LGBTQ-related controversy for weeks. First, the company faced extreme backlash from LGBTQ advocates for failing to stand strongly against the “Don’t Say Gay” bill. Now that it has spoken out against the bill, conservatives are outraged and accusing it of embracing “woke ideology” and promoting the indoctrination of children.