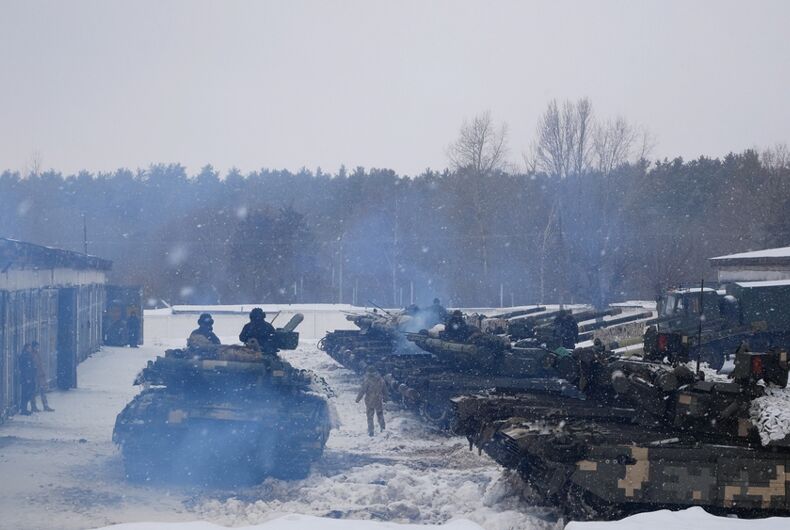 Kharkiv, Ukraine - January, 31, 2022: Tanks with tankers turn around and go to the training groundPhoto: Shutterstock

Gentle snow falls quietly to the ground here around my home in western Massachusetts as it does likewise across Ukraine today. It cannot cover over, though, the terror, the massive destruction, and the increasing death count of the valiant Ukrainian freedom fighters of all walks of life of that nation so far away and close to my heart.

“Russia did not invade Ukraine,” alleged Sergey Lavrov, Russian Foreign Minister on March 10, 2022. Russian President Vladimir Putin claimed he sent “a peacekeeping operation” into Eastern Ukraine to protect ethnic Russians and rout out Ukrainian Nazis. I either must be losing my perceptual abilities, or Putin and Lavrov are lying or delusional because what I am seeing and reading completely contradicts what they say.

In fact, Putin has clamped down even harder than before on Russian media. He is jailing reporters and closing media outlets that do not toe the narcissistic autocrat’s propaganda line.

The invasion and war (two concepts that if said or written in Russia result in harsh penalties) stand in clear view to the entire world. He might believe that he is deceiving the Russian people, but how long can he expect to mislead as a steady stream of body bags of Russian soldiers come home to their final resting places, and the internet brings the truth to Russian citizens?

Putin’s Big Lie has been fully exposed as has the Big Lie of his useful idiot, Donald Trump, who continually claims to be the rightful winner of the 2020 presidential election.

Putin has ordered an estimated 200,000 Russian troops with their lethal weapons of war not merely into Eastern Ukraine, but rather to march through and level towns and civilian populations throughout the entire nation.

He has bombed terribly close to the largest nuclear power plant in Europe on Ukrainian soil, and he destroyed a Ukrainian children’s hospital and maternity ward killing mothers and their babies. Is this part of some sort of “peacekeeping operation”? Were these people really Nazis?

His false flag “special operation” to search and destroy Ukrainian Nazis stands more as a psychological projection of his own fascist totalitarianism than it does about any realities on the ground.

So, what about the estimated thousands of Christian Nazi white nationalists in the United States who came above ground during the Trump regime? Will Putin amass hundreds of thousands of Russian troops around our borders for an eventual invasion? Or will he attempt to pressure the leaders of Canada and Mexico to undertake his dirty work?

On two occasions (2008 and 2012), I had the pleasure and privilege of visiting the beautiful and then peaceful country of Ukraine at the invitation of a former graduate student of mine. Following a trip to my ancestral home of Krosno, Poland, I traveled aboard a bus over the border to the historic town of Lviv where I met up with my friend Serhiy.

Over the next three days, we walked around the town taking in the sights and eating the delicious local cuisine. We talked with friendly residents who displayed pride and love of their nation and its traditions.

Surrounding us were monuments to Ukrainians who died in both World Wars and memorials dating back centuries showing how these strategic lands had suffered invasions from all directions in their ongoing struggles for freedom and independence.

Serhiy and I then boarded a night train to Kyiv where we stayed with his friend, a university student from the U.S. I was continually amazed by the beauty of this capital city: from the numerous sparkling gold spires atop Eastern Orthodox churches to the wide boulevards, and the expanses of city parks where parents romped with their active laughing children, and where dogs chased squirrels to the excitement of young and old alike.

But that is now gone. There are no longer young children running freely in the streets or the parks of Ukraine. The churches, theaters, schools, and stores are now closed and boarded. Some the Russians have leveled.

Millions of refugees are seeking shelter far to the west. Many more are pursuing refugee status outside their own borders from the kindness of relatives and strangers alike. For them, the future is uncertain as they are forced to separate from loved ones who remain in the country to fight the eastern invaders.

For those remaining, terror, starvation, and dehydration surround them as Russian bombs rain down on the once postcard picturesque and peaceful cities and towns.

Though the Western alliance of countries has stood strong by imposing sanctions on Russia, and by donating weapons and humanitarian aid to Ukraine, I am among those around the world who feel powerless in the face of the Western alliances’ inability (or unwillingness) to intervene more directly.

I understand that Russia is a nuclear nation. Putin has alluded to his ability to annihilate any nation that comes to the direct military aid of the Ukrainian government and its military.

Imposing and maintaining a “No-Fly Zone” by any nation over Ukraine would constitute an act of war against Russia and would spark serious consequences, warned Putin.

Are we “saving” potentially millions of lives by not going in? Or, rather, are we, as argued by Ukrainian President, Volodymyr Zelenskyy, condemning uncountable Ukrainian lives with western non-intervention?

The answers to a balanced position by taking into consideration all the variables are far above my pay grade. I must, therefore, rely on the policy experts to make these decisions.

I am certain, though, that what we are witnessing in Ukraine shows the resistance, resolve, and resilience of the human spirit among the good people against seemingly insurmountable odds of a tyrant with delusional ambitions of unifying the ancient Russian Empire, known as Imperial Russia, that extended across Eurasia from the year 1721.

Putin most likely considers reconstituting the former Soviet Union as it once existed as too meager a plan.

I do not believe it is mere hyperbole to state that the very cause of world democracy versus authoritarianism rests on the survival of Ukraine as a free and independent nation.

I hear, though, by some on the political left especially, that since our media and citizenry failed to show care and support for other people and nations (those with primarily non-western black or brown populations), then why should we mobilize and donate aid and intervene in primarily “white” Ukraine.

In other words, until and unless we support the struggles of people in the Middle East (for example, Palestinians and people of Yemen), as well as people on the African and South American continents, then we should not concern ourselves with the actions of the Russians against its neighbors in Ukraine.

Yes, the United States has sided with the Saudis and Emirates and against the Iranians in the multilateral Yemeni Civil War since 2014 between the Abdrabbuh Mansur Hadi-led government and the Houthi armed insurgency.

This has caused extreme hardships and deaths as a direct result of war with ensuing famine and malnutrition upon civilian populations, which we have been calling out for years with little response on the part of the proxy governments supporting the war efforts.

And yes, most likely because the people highest at risk are black and brown people, the world has turned its gaze elsewhere allowing the horrors to continue. These are issues we must continually expose, discuss, debate, and take actions to alleviate

To be clear, I fully appreciate and agree with people who raise these concerns, which I too share. We must perceive injustice as intersectional, and that when any group based on their social identities are targets of oppression, then no group is free.

Concern must never depend on skin color, or gender, or sexual identity, or socioeconomic background, or ethnicity, or ability, or age, or any other identifying factors.

Basically, though, some people are at least implying that when the world begins to take notice of suffering in areas of the world in addition to Europe, then and only then will they join in efforts to bring down oppressive regimes and mitigate suffering in Europe.

This is not only self-defeating, but it is anti-humanitarian. It inhibits chances for coalitions and alliances to improve all the many troubled spots around the world.

And this is how the far left and far right come together in hand-held closed circles of inaction (isolationism) in times of impending genocide.

In the end, “Whataboutism” on the left is a form of isolationism used to justify inaction in the face of oppression.

The United States stands precariously on a precipice: we remain at risk of falling by losing our democratic foundations and institutions. If Ukrainian democracy falls, the democratic dominoes risk falling around the world.

Florida governor stands his ground against Disney: “We don’t want transgenderism in kindergarten”