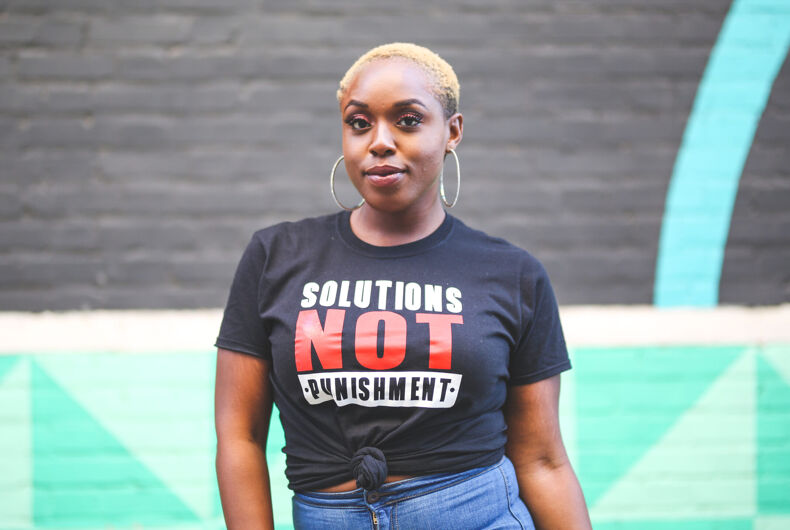 Trans visibility has skyrocketed in the past ten years, and while, in general, increased visibility and representation are seen as positive, one organization is pushing for the need to think beyond it.

Related: 3 leadership tips from one of the world’s few trans CEOs

Snap. Co. fights for safety, leadership development, and power for all Black people, but especially Black queer and trans people. Williams has worked with the organization for almost a decade. A Black trans woman, herself, she has spent the past two years as executive director. Since then, she has worked to develop about 25 leaders who have focused on conducting on-the-ground research for Snap Co.’s “Deeper than Visibility” report, released today in honor of the Transgender Day of Visibility.

The report examines policing and public safety as it currently exists in Atlanta and reimagines a system in which Black queer and trans people are not targeted and instead are provided the resources they need to both survive and thrive. The report, Williams said, looks at the political, policy, and cultural shifts the organization believes must take place to keep the most marginalized communities safe.

On a grassroots level, Snap Co. is already working to provide these resources through programs like the “Taking Care of Our Own Fund,” which provides direct assistance to Black trans and queer Atlantans in need of housing, food, clothing, bill assistance, and emergency bailout funds. Williams said the fund has supported over 265 people since 2016.

The 37-page “Deeper Than Visibility” report, however, advocates for change on a more systemic level. It states that a “newer, safer Atlanta” means decriminalizing sex work, investing in Black and Brown trans leadership, ending over-policing in Black trans and queer communities, greater investments in supporting those living with HIV, and an overall end to violence against queer and trans people.

It also shares personal stories “from the trenches,” including one from out Georgia state Rep. Park Cannon (D), who wrote, “To this day, in Atlanta, the times when I’ve felt the most unsafe were around law enforcement who routinely flex their power in an effort to intimidate people like me: Black people, queer people.”

Let’s have a conversation in the comments 👇🏾 https://t.co/mChuOAQUtU

The report centers the idea at the core of the organization – the need to find solutions and not punishment.

The phrase, Williams explained, means that “the people who are closest to the issues have solutions and interventions that work for them.”

Snap Co. initially began in 2013 as a response to an ordinance the city of Atlanta was considering that would have banned convicted sex workers from entering certain areas of the city.

“[Snap Co.] was literally a cry that these folks need to be centered in order to get free, in order to not be thrown in cages, and what it looked like was Black trans people and all of our allies, cis women who were formerly incarcerated and also sex workers, Latina women, gender nonconforming folks, queer folks, heterosexual folks…The Solutions Not Punishment Collaborative is a testament and literally the embodiment of collaboration across identity and experiences in the center of Atlanta.”

Looking toward the future, Williams said she plans to keep doing the work until it no longer needs to be done. Right now, that means continuing to fight for resources.

“It’s refreshing and heartfelt to be able to support people; it also breaks my heart when we can’t,” Williams said.

“One of our visions for Black trans liberation is that we have the resources we need to thrive, to govern ourselves, to house ourselves, to build the communities and the structures and the businesses and the ideas that we want to see.”

“We want to be around for people to call us a political home.”

“It is the responsibility of queer communities to empower transgender communities both socially and economically. Simply put, queer liberation exists because of transgender people. History tells us that over and over again.” pic.twitter.com/leOn6rcLvF