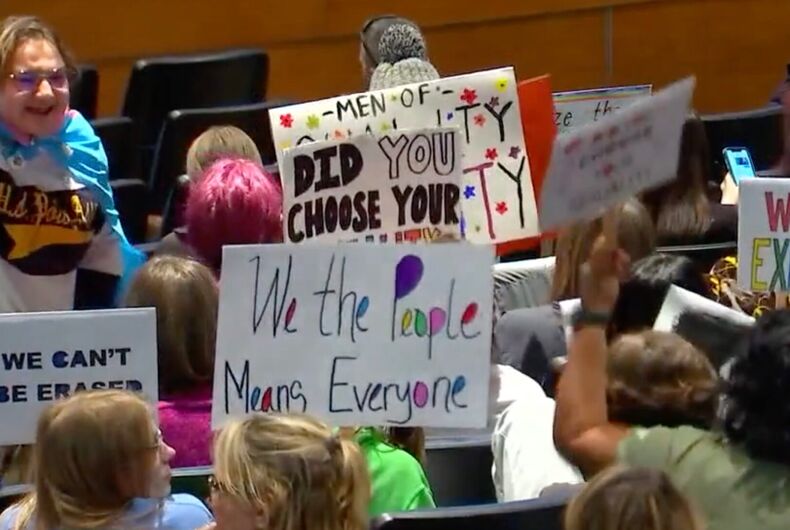 LGBTQ protestors turned out in droves to a meeting of the Becker School District board in Minnesota to disrupt an anti-LGBTQ presentation taking place.

In January, the board hosted a talk from the LGBTQ advocacy group, OutFront, and it reportedly decided it was important to also hear from “the other side,” according to The Hill.

Related: Trans Oklahomans sue the state for refusing to update the gender markers on their birth certificates

As such, on Monday it hosted the virulently anti-LGBTQ Minnesota Child Protection League (MNCPL), which has an entire page on its website devoted to “why gender ideology harms children.”

“The militant LGBT movement and its establishment sponsors have long argued that brainwashing and sexualizing children is simply an effort to end bullying, ensure ‘safety,’ and promote tolerance,” the page states, “But as the CDC study and other data show, and as the LGBT movement understood all along, the real result is a dramatic surge in confusion and perversion.”

The website also calls kids coming out as trans a “disturbing trend,” and the group has repeatedly lobbied against legislation that would protect LGBTQ people.

And so, LGBTQ students and allies were outraged that this group was brought to the school board meeting and considered to hold legitimate views.

“I don’t understand how you could think there’s another side to human rights, but they claim that there is,” Dr. Heather Abrahamson, a GSA advisor and social studies teacher at Becker High School, told the St. Cloud Times.

“This is disgusting,” trans student Skyler Seiler told Fox affiliate KMSP. “I can’t believe this, we are humans too. I don’t know why they’re treating us like we’re not. Is it not your job, as school board members, to make your students feel safe and welcome?”

Throughout MNCPL’s presentation, hoards of LGBTQ and allied protestors chanted and yelled to disrupt it. They held rainbow signs and shouted, “Gay rights are human rights.”

At one point, video shows a community member approaching the microphone and declaring, “You suck” to the presenters, after which the crowd went wild.

“This is painful, I’m sure those kids in there feel even more ostracized and like the school doesn’t back them and like they have even less rights,” said district parent Maggie Seiler.

The school also had severe issues with anti-LGBTQ hatred last year. An anti-LGBTQ comment on the Becker community Facebook page led to outrage and tension across the district, even leading to a group of students lining their trucks up every week to display Trump and “Don’t Tread on Me” flags. The students claimed, however, it had nothing to do with the anti-LGBTQ tension taking place.

“There was some pretty severe Snapchat messaging happening between students telling them to kill themselves and flushing pride flags down the toilet,” GSA advisor Joe Rand told the St. Cloud Times.

Multiple students were assaulted, and some stopped attending school out of safety concerns.

The ACLU of Minnesota also got involved after the Becker Chief of Police warned students that were protesting the anti-LGBTQ social media comment to stop posting a screenshot of it or else risk civil or criminal punishment. The organization warned the police department to stop chilling free speech and cease contacting students.

As time went on, the district began to take action, including adding a GSA to the middle school and implementing a more streamlined process to handle reports of bullying.

High school senior Nick Roehl said that in meetings, administrators “seem super supportive and seem like they want the best for us, but then when it really comes down to it, they’re not willing to do what we need.”

A statement from Becker Public Schools claimed, “We are committed to meeting the needs of all students, staff and the community as a school board. And when we say ‘all,’ we mean it. Hate has no home here. All people are respected and cared for in the Becker Public School District.”

J.K. Rowling decided to speak on behalf of lesbians & OMG it didn’t go over well