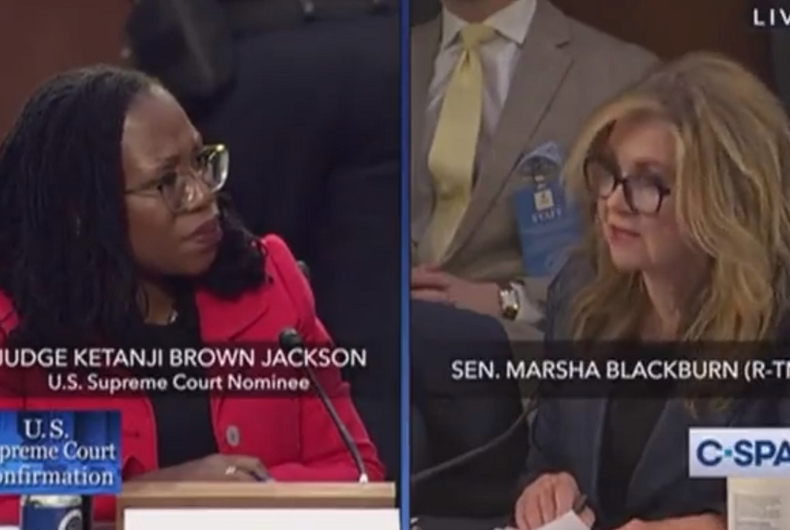 Republicans have spent days grandstanding, asking bad faith questions, and just ranting at Judge Ketanji Brown Jackson during her Senate confirmation hearing, and she has been praised for staying cool and collected throughout it.

Republican senators are using the hearing to air their own hateful beliefs about LGBTQ people, especially the transgender community.

Related: Could Marjorie Taylor Greene be blocked from reelection because she’s an insurrectionist?

The Senators have repeatedly pushed Jackson to share her opinions, despite her emphasis that she cannot due to the fact that there are so many cases about these issues moving through the courts right now.

But that hasn’t stopped the Senators from continuing to hurl “gotcha” questions that Jackson refuses to fall for.

Here are some of those moments.

Sen. Marsha Blackburn (R-TN) decided to use a large chunk of her opening statement on March 21 to rant against trans rights. After declaring it would be a “very respectful” hearing, Blackburn accused Jackson of endorsing “progressive indoctrination of our children.”

Blackburn said how alarmed she was that Jackson is on the board of a school that she claimed “teaches kindergarteners – five-year-old children – that they can choose their gender, and teaches them about so-called ‘white privilege.”‘

She spoke about parental rights being one of the most important issues to people in her state, claiming parents are concerned with the “progressive agenda” being pushed in some public schools.

“Educators are allowing biological males to steal opportunities from female athletes in the name of progressivism,” she said, proceeding to bring up the recent NCAA victory of trans swimmer Lia Thomas.

Blackburn continued to rant about how trans women having rights somehow teaches cisgender girls that “their voices don’t matter.”

Ted Cruz asking if he can decide to be Asian

Sen. Ted Cruz (R-TX) managed to ask a question about transgender people that was so dumb Jackson just couldn’t hide her visceral response.

“I’m an Hispanic man,” Cruz asked Jackson, as he mocked transgender people’s identities. “Could I decide I was an Asian man?”

Cruz, who has a degree from Harvard Law School, apparently remembered that he’s supposed to be asking questions about the law, so he added, “W-would I have the ability to be an Asian man and challenge Harvard’s discrimination because I made that decision?”

“Tsk,” Jackson said disapprovingly, looking down. It was a brief moment before she gave her response: “Senator, I’m not able to answer your question. You’re asking me about hypotheticals.”

Then just to make sure that the cameras captured every moment of his grandstanding, Cruz reportedly returned to his seat after he was done questioning Jackson and yanked out his phone to check his mentions on Twitter, according to Los Angeles Times reporter Nolan D. McCaskill and confirmed by photojournalist Kent Nishimura.

Jackson schooled Sen. John Cornyn (R-TX) when he  tried to get her to agree that conservative Christians’ religious freedom is being curtailed by marriage equality being legal. All she had to do was explain what a right is.

“Do you see that when the Supreme Court makes a dramatic pronouncement about the invalidity of state marriage laws that it will inevitably set in conflict between those who ascribe to the Supreme Court’s edict and those who have a firmly held religious belief that marriage is between a man and a woman?” Cornyn asked.

Jackson responded that she can’t comment on the matter because there are currently cases being decided that involve such issues.

“I’m not asking you to decide a case!” he snapped back. “I’m just asking, isn’t it apparent that when the Supreme Court decides that something that is not even in the Constitution is a fundamental right and no state can pass any law that conflicts with the Supreme Court’s edict, particularly in an area where people have sincerely held religious beliefs, doesn’t that necessarily create a conflict between what people may believe is a matter of their religious doctrine or faith and what the federal government says is the law of the land?”

Jackson then explained to him that it’s not a violation of anyone’s religious freedom to not be able to take other people’s rights away.

“Well, senator, that is the nature of a right,” Jackson responded dryly, “that when there is a right, it means that are limitations on regulation, even if people are regulating pursuant to their sincerely held religious beliefs.”

Cornyn seems to have an issue with SCOTUS's 2015 ruling that same-sex couples have a right to marry pic.twitter.com/zVTFJBquj7

The hits kept coming from Blackburn, who grilled Jackson on transgender equality during the second day of the hearing.

“Can you provide a definition for the word woman?” Blackburn asked.

“I can’t,” Judge Jackson replied. “Not in this context, I’m not a biologist.”

In another question, Blackburn asked Jackson about states that allow transgender students to participate in school sports.

“What message do you think this sends to girls who aspire to compete and win in sports at the highest levels?” she asked. Blackburn was probably only referring only to cisgender girls since she did not seem concerned with the well-being of transgender children.

Again, Jackson took the question back to the law instead of getting stuck in a debate.

“Senator, I’m not sure what message that sends,” she replied. “If you’re asking me about the legal issues related to it, those are topics that are being hotly discussed, as you say, and could come to the court, so I’m not able to—”

Blackburn didn’t want to talk about legal issues or even hear Jackson’s answer.

“And I think it tells our girls that their voices don’t matter,” Blackburn interrupted as she started to rant. “I think it tells them that they’re second-class citizens. Parents want to have a Supreme Court justice who is committed to preserving parental autonomy and protecting our nation’s children.”

Sen. Marsha Blackburn: "Can you provide a definition for the word woman?"

Judge Ketanji Brown Jackson: "I can't. Not in this context. I'm not a biologist." pic.twitter.com/BK1ENBdYcG