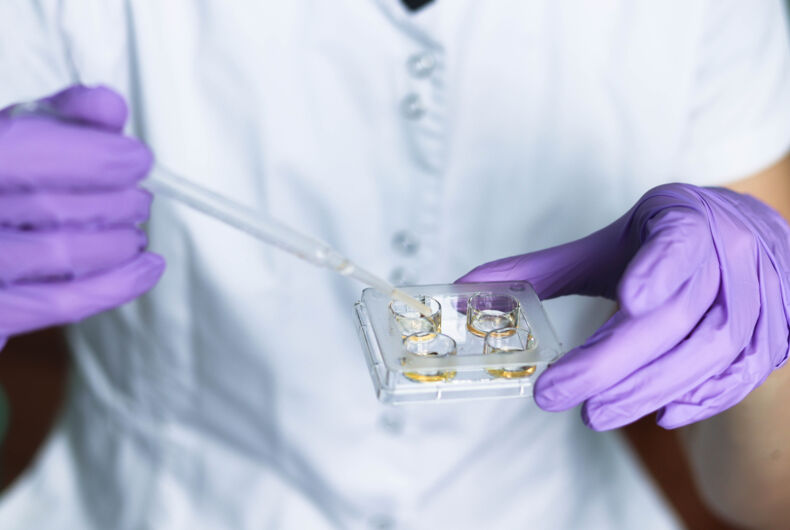 A lesbian couple in New York state is suing a fertility clinic after they were assured that their baby was going to be a girl but turned out to be a boy.

Heather Wilhelm-Routenberg said that she told her wife Robbie Routenberg-Wilhelm that she only wanted to have kids if the kids were girls.

“I met Robbie at SUNY Geneseo as undergrads in 2002,” Heather wrote in the New York Post. “One day during an internship, we were asked to act out a scene as a couple. We were directed to hold hands, and we were still holding hands at the end of class. After I broke up with my girlfriend, we started dating. There was a brief time post college we weren’t together and during that period of time two different male acquaintances assaulted me.”

She said that she and Robbie got back together later and married in 2012. When they started thinking about a possible family, they decided they wanted two daughters.

“When my sister told me she was trying to have a baby with her husband, she said, ‘I can have a baby that’s partially my favorite person,'” Heather recounted. “And I realized, ‘Oh my gosh, I could carry Robbie’s baby!’ I imagined a tiny little Robbie in my body, and that felt very safe and exciting.”

They went to the CNY fertility clinic in Latham where they were told that the clinic could determine the chromosomes of the embryos created with Robbie’s eggs and donor sperm that Heather would later carry.

“We selected CNY because they agreed we would be able to select female embryos. We never intended to use the males,” Heather said.

But at 15 weeks, the doctor determined that Heather was carrying a boy. At first, Heather thought she was carrying another couple’s embryo.

“During that time, I had no connection to the baby inside — I figured I would be giving it away to its real parents,” Heather wrote. “I tried not to think about being pregnant.”

Another test determined that the baby was in fact Robbie’s.

“I was so furious. It felt like a deep betrayal. How the f**k do you mess up that bad?” Heather said. “They messed up something so integral; the fact that there are no legal requirements about these procedures should strike fear in the hearts of all parents using fertility services.”

She explained why it was so important to have a daughter and not a son: “We didn’t want to have a boy because of the assaults and because of the socialization of boys — there’s constant socialization of what it means to be a ‘real man.’ People say, ‘Oh, he’s a boy, let him hit you,’ and all the camouflage and guns don’t help. It reinforces masculinity, and that’s a reminder of the assaults every time.”

She said she felt even lonelier because no one understood “the complexity of my feelings.”

“The whole pregnancy, I couldn’t connect to the baby. I hate saying that. It’s painful. It was a terrible experience.”

After their son was born, Heather said she had trouble breastfeeding because she would wear clothes so her son wouldn’t touch her chest.

“When he did, it sent electric shockwaves through me.”

“I started experiencing extreme anxiety. I would look at the baby and it would contort into the faces of all these grown men that I know. It was so creepy. Whenever that happened, I had to give the baby to Robbie.”

She said that she doesn’t dislike her baby – “he’s a lovely kid” and “when it’s just us, it’s amazing!” – but that “when we’re out in the world, he’s a symbol of something, being socialized as the same people who did bad stuff to me.”

Heather said she blames the clinic for messing with “our baby’s first formative years,” that he’s “innocent” and “didn’t deserve any of this.”

“I share Heather’s pain, and I didn’t get to have the celebratory chapter that many people do when having a baby,” Robbie said. “This is the only child we will have with my genetic material and it was a terrible experience.”

Their complaint against CNY includes charges of breach of contract, medical malpractice, and battery. CNY isn’t commenting on pending litigation.