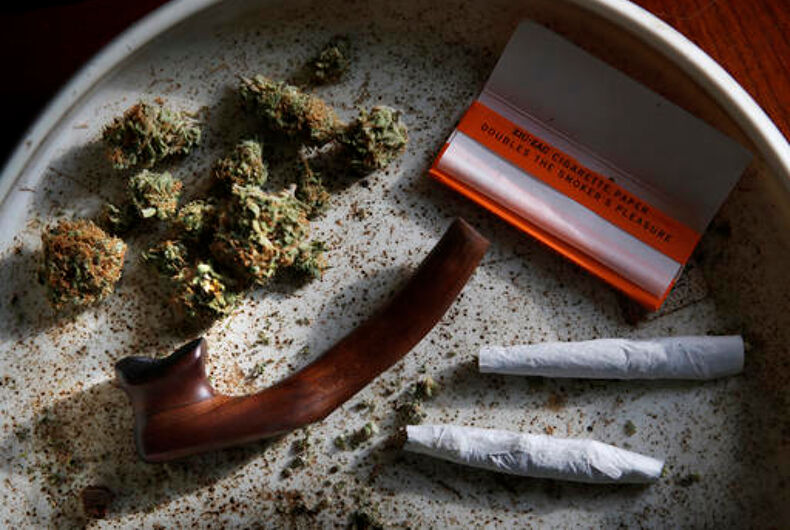 FILE - This this Nov. 21, 2014, file photo shows medical marijuana, a pipe, rolling papers and two joints in Belfast, Maine. The first tangible results of state voters’ decision to legalize marijuana are being felt as possession and home growth of marijuana becomes legal Monday, Jan. 30, 2017. Voters narrowly passed the ballot question in November, and the waiting period between the vote and legalization has expired. Photo: (AP Photo/Robert F. Bukaty, File)

If you ever wondered what it would be like if Republicans were able to run the government the way they want to, look no further than the District of Columbia. No, not the inner workings of Congress, but the way Congressional Republicans disregard the basic tenets of democracy when it applies to the residents of Washington.

The District is overwhelmingly liberal, which drives the conservatives who work there crazy. But thanks to the way Washington is governed, Republicans can basically still call the shots.

Related: The right loves First Amendment rights. But only when it applies to them.

A recent case in point is the legalization of marijuana sales. In 2014,  65 percent of residents voted to legalize recreational marijuana. However, legalizing sales of cannabis has been held up by Republicans in Congress ever since.

The chief proponent of overturning the will of the voters has been Rep. Andy Harris, a Maryland Republican, whom HRC once named to its Hall of Shame  for having “gone out of his way to sponsor nearly every anti-LGBT bill introduced in the House.”

Harris introduced a rider in 2014 in a federal spending bill blocking sales of cannabis in the District, and he’s seen to it the rider has been included in every spending bill since. It managed to survive in the latest $1.5 trillion spending bill passed last week.

So how does one right-wing Republican get to rewrite the choices of thousands of voters in the District? The reason is simple: Congress calls a lot of shots for the District. The Constitution grants Congress exclusive jurisdiction over the District “in all cases whatsoever.” While DC has a mayor and city council, Congress can by fiat overrule them. Ditto the voters.

That makes Washington the perfect petri dish for the GOP’s anti-democratic experiments. In fact, the party has been doing its best to thwart the will of the voters for years. Congress blocked a domestic partners bill passed in 1992 and a clean needle exchange program in 1996.

Since then, several states have followed this example and imposed their own anti-democratic measures on local municipalities. Texas won’t allow cities to enact their own gun-control measures. Alabama won’t let cities set their own minimum wage above the state. Many of the measures are targeted at culture war issues: abortion, immigration, even bans on plastic bags. And LGBTQ rights, of course.

Democrats have been pushing for Washington to become a state so that its residents have the same rights as other states. Republicans hate the idea, probably not least because of the size of DC’s LGBTQ population.

But Republicans are increasingly drifting away from democracy in any case. They want a governmental structure where they simply do what they want to do, voters be damned. We got a taste of that with the Big Lie about the 2020 presidential election. Unfortunately, that may have just been the beginning.