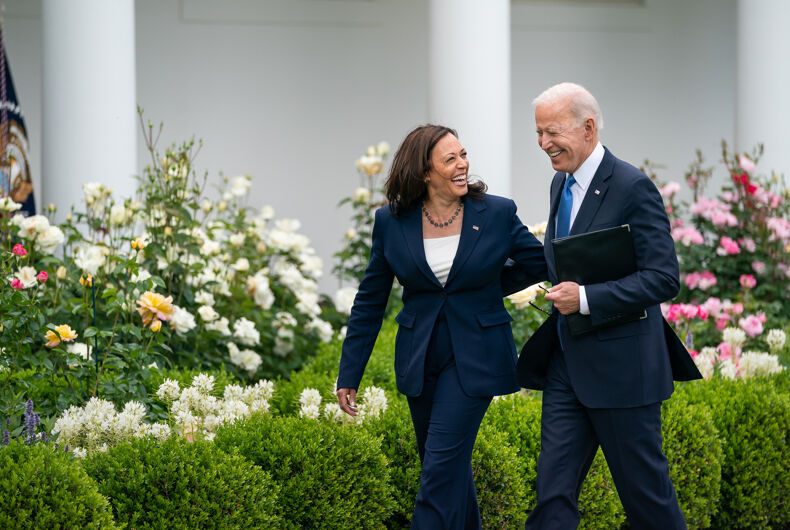 Releasing a new fact sheet for the Transgender Day of Visibility (TDOV), the White House laid out dozens of actions that are being taken across the executive branch to help transgender people.

One of the bigger items is that the Department of State will start issuing passports with “X” gender markers starting on April 11. Secretary of State Antony Blinken said in a separate statement that medical documentation will not be required and the X gender marker will officially be defined as “Unspecified or another gender identity.”

The Department of Homeland Security (DHS) is also implementing new measures to make airport security screening better for transgender people. Advanced Imaging Technology (AIT) body scanners often cause false positives when it comes to transgender people since it’s gender-based; TSA workers enter the passenger’s gender into the machine before a person is scanned based on their visual assessment.

“By replacing the current, gender-based AIT system, this new, more accurate technology will also advance civil rights and improve the customer experience of travelers who previously have been required to undergo additional screening due to alarms in sensitive areas,” DHS said in a statement. “TSA will begin deploying this new technology in airports throughout the country later this year.”

TSA PreCheck will also start including an X gender marker option this year and DHS said that it will work with airlines to promote the acceptance of X gender markers, something that has made travel difficult for some non-binary people.

The Department of Health and Human Services (HHS) launched a new website for the mental health of transgender youth as states attack their rights. The “LGBTQI+ Health & Well-being” page has information about health resources for LGBTQ people.

One of the biggest policy changes announced today comes from the Social Security Administration (SSA), which will no longer require transgender people show a doctor’s note in order to update gender information in their records. The change will take place this fall, making it easier for trans people to access retirement benefits and apply for jobs.

Other measures being taken by the White House today include pushing for transgender and LGBTQ inclusion in certain studies, expanding the use of the X gender marker by other federal agencies, and offering training for schools and employers on transgender inclusion.

“We know that the work is far from over to ensure that our transgender and non-binary loved ones are protected from the onslaught of harassment and harm that is happening in dozens of states across the country,” said PFLAG National Executive Director Brian K. Bond in a statement. “But it helps to know that the President and the administration recognize, affirm, and uplift all people, inclusive of our differences, because we all deserve the freedom to be ourselves. Thank you, President Biden, for caring about and supporting our families in meaningful ways.”

The full, over 4000-word factsheet is available on the White House website.