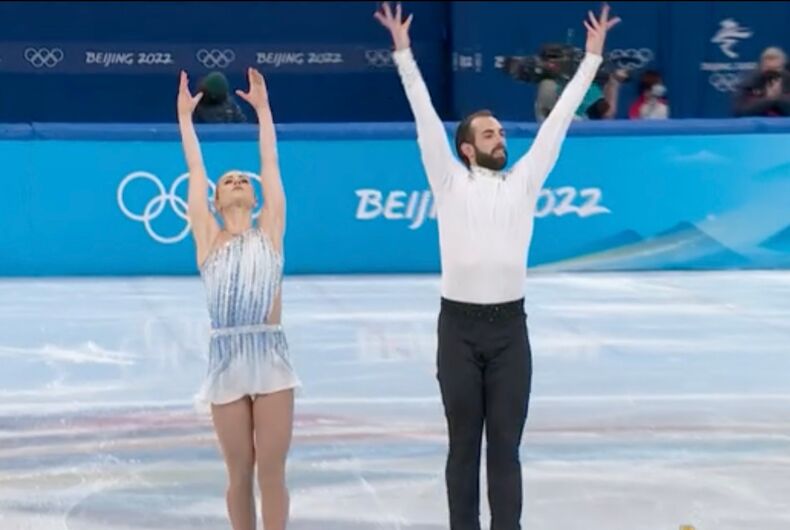 With an epic performance in the pairs’ short program on Friday, Olympic skater Timothy Leduc officially became the first out non-binary athlete to compete in the Winter Olympics.

Alongside their partner Ashley Cain-Gribble, the pair gained a score of 74.13, which was enough to earn them a spot in the free skate on Saturday.

LeDuc and Cain-Gribble, who have skated together since 2016, earned their spot in the Olympics after coming in first at this year’s U.S. Figure Skating Championships.

With their performance in the pairs' short program, Timothy LeDuc is the first publicly out non-binary athlete to compete at a #WinterOlympics. pic.twitter.com/ouKovdAZhD

In January, they appeared on the “My New Favorite Olympian” podcast to discuss their revolutionary partnership and how they refuse to conform to the gendered tropes that are hyper-present in pairs figure skating.

Pairs figure skating routines almost always involve a romantic storyline in which a strong man comes to the rescue of a vulnerable woman, but neither LeDuc nor Cain-Gribble are interested in that and instead focus on routines in which both skaters are empowered.

“I never want anyone to feel shame for parts of themselves because they’ve come in to figure skating,” LeDuc said. “I think of skaters like me who maybe want to put on makeup and go out and skate in a costume that maybe is unusual or different, but maybe they wouldn’t do those things because they feel like the judges aren’t going to give them as good of scores.”

In the 2019 U.S. Championships, the pair competed with a routine they called “Two Pillars of Strength.”

“The message is two amazing athletes coming together to create something beautiful,” LeDuc said.