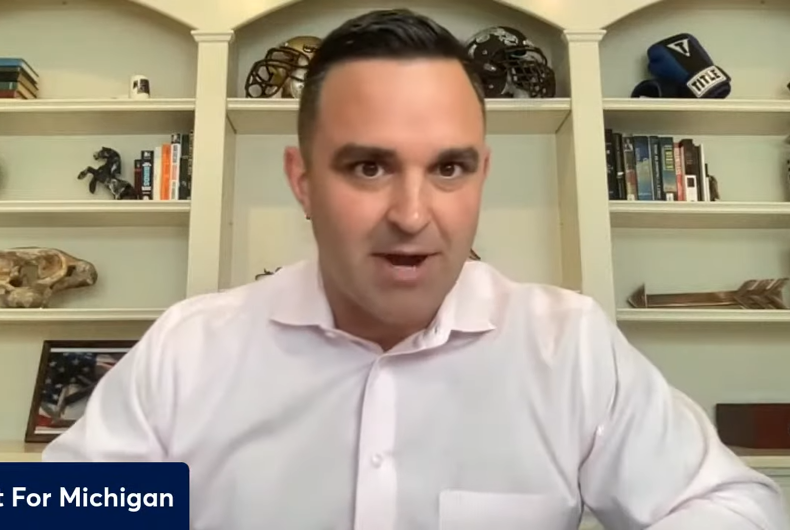 Garrett Soldano, a Republican gubernatorial candidate in Michigan, is so anti-choice that he believes rape victims who become pregnant should carry the baby to term and give it up for adoption instead.

“God put them in this moment,” he told a rightwing podcast, before continuing to offend women nationwide with his reasoning that included a dubious story meant to back up his assertion.

Soldano, a chiropractor running in the GOP primary, told the host that he is “pro-life” and that he would encourage women to have the babies and let them know “how heroic they are and how unbelievable that they are, that God put them in this moment. And they don’t know that little baby inside them may be the next president, may be the next person that changes humanity.”

He went on to tell a story about his “mentor,” which had all the hallmarks of a tale told around a Bible camp bonfire.

Saldano claimed his mentor was adopted and had found out “his mom was gang raped in a subway train station by five guys.”

“It kind of like tore out his heart when he found that out, but then he started to really appreciate and understand what his birth mother went through, that she had the courage to deliver him,” Soldano added.

“Every candidate in the GOP primary has said they will undermine a woman’s right to choose,” she noted.

But Saldano isn’t “backing down.”

In a rambling 15-minute video posted to YouTube, he sets the classic Tom Petty tune “I Won’t Back Down” to images of himself on the campaign trail. After it plays, he continues to defend his statements.

The remarks, widely condemned by Democrats, were reminiscent of former Indiana Treasurer Richard Mourdock’s statements during a failed Senate bid.

“I struggled with it myself for a long time, but I came to realize life is that gift from God,” he said. “And I think even when life begins in that horrible situation of rape, that it is something that God intended to happen.”

Former Rep. Todd Akin (R-MO)’s made similar comments during a failed Senate bid, but tossed in a basic lack of knowledge on how the reproductive system works as a cherry on top.

“It seems to me, from what I understand from doctors, that’s really rare,” Akin said. “If it’s a legitimate rape, the female body has ways to try to shut that whole thing down. But let’s assume that maybe that didn’t work or something: I think there should be some punishment, but the punishment ought to be of the rapist, and not attacking the child.”

Akin and Mourdock both apologized, but Akin withdrew his apology in a biography published after he lost the election.

Garrett Soldano, a GOP candidate for governor in Michigan, says we must inspire women who have been raped to understand how heroic they are in giving birth and see that "God put them in this moment."

They don't know "that baby inside them may be the next president." pic.twitter.com/uVVqX2G54S

Absolutely disgusting and dangerous comments from GOP gubernatorial candidate Garrett Soldano. Unfortunately, he's not the only one with extreme views like this — every candidate in the GOP primary has said they will undermine a woman’s right to choose. https://t.co/KO6XXoKxkY

This is truly sickening. I have no other words. https://t.co/em2KbDHpYD