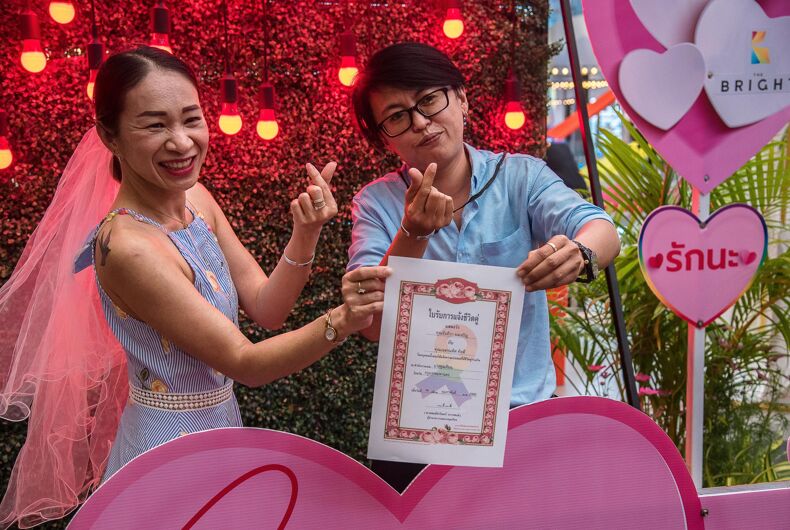 Marriage equality has still not been made reality in Thailand, and as such, Valentine’s Day this year was filled with LGBTQ activism in the nation’s capital.

First, activists rallied in Bangkok to protest the fact that they cannot get married like everybody else. Partners Brahmasara “Fah” Viradhammajari and Titat “Peter” Kuantrakul led a demonstration while carrying a letter from their district office rejecting their application for marriage.

Related: The number of adults who identify as LGBTQ has doubled in the past 10 years

And one community took their protest even further.

It’s a popular tradition in Thailand that couples register their marriages on Valentine’s Day, and on Monday, Bangkok’s Bang Khun Thian district made sure LGBTQ couples didn’t miss out.

The district issued marriage certificates to LGBTQ couples at a shopping mall event with the theme, “The Candle of Love.”

While the marriage certificates given to the LGBTQ couples were not legally binding, at least 20 took advantage of the symbolic gesture – including the fierce and joyful couple depicted in LGBTQ Nation’s photo of the week.

Peter Thiel got savaged on German TV & it is hysterical