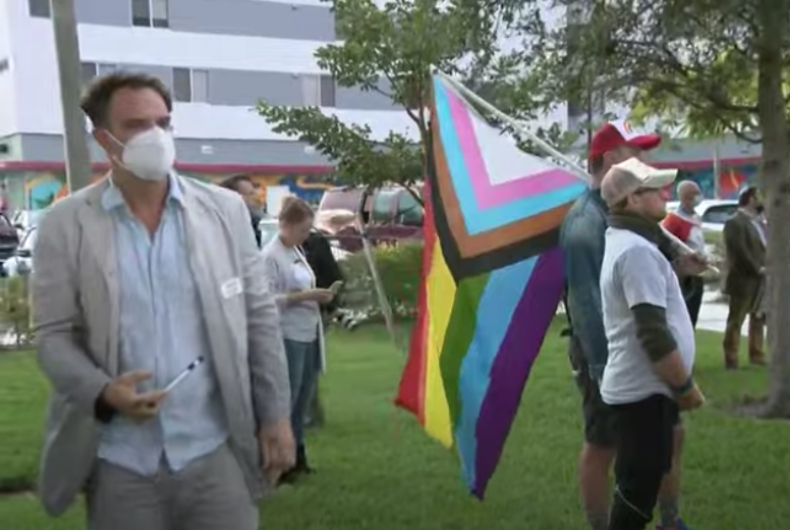 Roughly 100 people, including students, have protested H.B. 5057, Florida’s proposed “Don’t Say Gay” bill, a bill that would ban teachers from acknowledging the existence of LGBTQ people.

The protest occurred Tuesday evening outside of the Pride Center in Wilton Manors.

The bill’s text would make it illegal for teachers from kindergarten through fifth grade to discuss anything in the classroom related to LGBTQ identities. If they do so, parents can sue them.

Say “NO WAY” bills making their way through the Florida Legislature would erase LGBTQ+, and gender issues in Florida Schools. Safe Schools South Florida will be having a rally at the Pride Center at Equality Park on Tuesday, Feb. 1, 2022 at 6PM. pic.twitter.com/TMFbjvGmP1

If the bill passes, children raised by same-sex parents won’t be able to discuss their families in schools, even though it’s completely legal for same-sex couples to wed and raise kids, Scott Galvin told WFOR-TV. Galvin is executive director of Safe Schools South Florida and a North Miami city council member.

Tom Landers, a former teacher and board member of Safe Schools South Florida, told the news station, “When I was young, I couldn’t be out. And it’s important. As a history teacher, I always make sure that I mention people from all parts of our community.”

Chasten Buttigieg, husband of out Transportation Secretary Pete Buttigieg, has said of the bill, “Whether this bill passes or not, it’s important to point out that trauma [against LGBTQ kids and kids from same-sex families] has already started. They see us talking about it. They see their identity up for debate right now.”

While the bill is being considered by the Florida House, a companion bill hasn’t been introduced in the Senate.

A 2017 Hornet article found that seven states with similar “no promo homo” laws also had some of the worst HIV rates in the entire nation.

The LGBTQ student advocacy group GLSEN says that schools often misapply vaguely written “no promo homo” laws to apply to health curriculum, school events, and even extracurricular activities. Such states also offer little to no sexual health education, leaving LGBTQ students completely ignorant about their identities or how to protect themselves from anti-LGBTQ bullying.

The bill is just part of a larger anti-LGBTQ push from state conservatives. In late 2021, the Florida Department of Education yanked down an anti-bullying portal following pressure from right-wingers. The department said the information is “under review,” but it’s unclear when, if ever, it will return online.