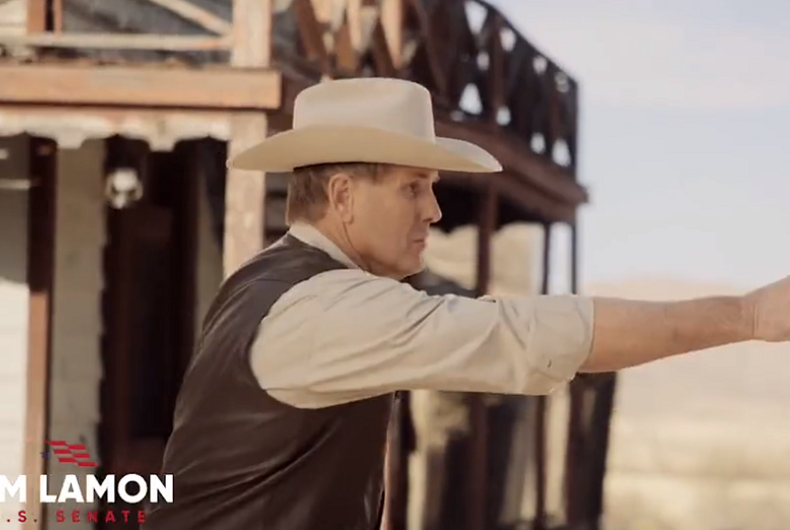 Lamon plays an old west sheriff who confronts the Democrats. The townsfolk – who are all white even though only 60% of Arizona’s population is non-Hispanic white, according to the U.S. Census Bureau – complain about how they’re “tired of being pushed around… and inflation! And open borders! And gas prices!”

Lamon then shoots at the Democrats, knocking their guns out of their hands.

Arizona has had enough of the DC Gang’s open borders, high gas prices, and shifty politicians pushing us around. @CaptMarkKelly @JoeBiden @TeamPelosi, it’s time for a good old-fashioned showdown.

On Twitter, people were angry that a political candidate would be so nonchalant in portraying gun violence against elected officials.

If the @SecretService doesn't act on this it needs to be disbanded. @FBIWFO @DHSgov

This should automatically disqualify you from ever holding office. Enough is enough. People are fed up with this violent rhetoric and imagery.

So we are just threatening the lives of public officials now? @TwitterSupport, this has been up for quite a while now. @FBI, @SecretService, @TheJusticeDept …until there are consequences, this will never end!

"Threats of violence have become commonplace among a significant part of the party, as historians and those who study democracy warn of a dark shift in American politics."https://t.co/MdVL7HCYvC