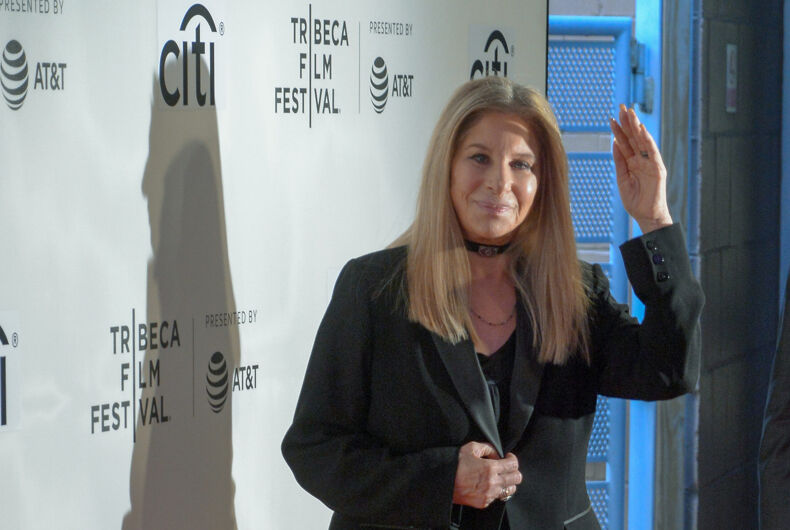 As a handful of artists have begun to turn their backs on Spotify in light of the Joe Rogan controversy, fans were left to wonder whether Barbra Streisand would walk off as well. This came after a tweet claiming that Streisand had threatened to remove her music from the app “if it doesn’t deplatform Joe Rogan immediately”. But is there any truth to that claim? Let’s find out.

On Feb. 4, a tweet circulated the Twittersphere saying that Barbra Streisand was threatening to pull all her music from Spotify if it didn’t take action against Joe Rogan.

The comedian and podcast host has been the center of a heated controversy over the past month for accusations of spreading misinformation about the COVID-19 pandemic and vaccines.

In late December, Rogan invited disgraced virologist expert Dr. Robert Malone on his podcast, The Joe Rogan Experience, where he essentially gave Malone free reign to discuss his “conspiratorial and baseless beliefs” – as one infectious disease expert calls them – on the supposed inefficacy of vaccines and his theory that the public is being hypnotized into believing in vaccines.

It should be noted that Malone has been banned from Twitter for spreading misinformation and many of his claims have been debunked by experts.

As the episode went viral – particularly in right-wing circles – a group of 270 scientists, medical professionals, and science communicators signed an open letter to Spotify calling on the streaming service to implement a misinformation policy.

Following the release of the open letter, musician Neil Young, who was once a part-time member of Crosby, Stills, Nash & Young, released a since-deleted letter on his website, Neil Young Archives. In it, Young said that Spotify has a “responsibility to mitigate the spread of misinformation on its platform”. The veteran rocker then announced that he wanted all his music pulled from the platform. “They can have Rogan or Young. Not both”, he added.

Since Young’s announcement, other artists have stepped up to the plate, including the likes of Joni Mitchell and fellow Crosby, Stills, Nash & Young bandmates.

Did Barbra Streisand Really Threaten To Pull Her Music Off Spotify?

No. Streisand has not threatened to pull her music catalog from Spotify. As of today, her music is still accessible on the streaming service.

A representative for Streisand spoke to the Associated Press to deny the claims. And if you check her social media profiles, you won’t find any posts that indicate she ever made such a threat.

Streisand did turn to Twitter on Feb. 6 to clear the air, saying, “Someone impersonating me put a statement about the situation at Spotify. I applaud the musicians who have pulled their music because of Joe Rogan’s statements. I will review the situation further and make my own decision”.

“Social media has become a haven for disinformation and a threat to democracy”, she added.

Whether Streisand will eventually leave the platform is still up in the air. However, the EGOT-winner has made her stance on vaccines perfectly clear, so we might not have to hold our breath for too long. In an interview with Billboard to promote her latest compilation album, Release Me 2, Barbra lamented about how she was looking forward to giving fans some new material but couldn’t because “people are not getting vaccinated”.

“If more people get vaccinated, I can go back into the studio”, she said.

“They’re dragging their feet for no good reason. It’s just common sense. Science is real. Climate change is real, it’s not fake news or a hoax”, she added. “Too many people have died by thinking science is a hoax. I want everybody, for their own health and their family’s health, to get vaccinated. Please?”

The Growing List Of Artists Who Have Left Spotify

Aside from Neil Young, several musicians and podcasters have chosen to leave Spotify as it continues to provide Rogan with a platform. The New York Times reported that Rogan signed an exclusive podcast deal with Spotify worth $100 million in 2020.

In response to Young’s (and others’) departure, Spotify’s CEO Daniel Ek announced that the platform would add advisories before every podcast episode that discussed the pandemic. He also said that the streaming service has removed over 20,000 podcast episodes related to COVID since March 2020. However, he also insisted that they had a responsibility in “balancing both safety for listeners and freedom for creators”.

And for many, this isn’t nearly enough to counter the damage that Rogan has caused – or will inevitably do.

Here’s a list of artists and podcasters who have recently followed in Young’s footsteps and turned their backs on the streaming giant:

On Jan. 28, Mitchell was among the first to rally behind Young (whom she has been friends with for decades) and the “global scientific and medical communities” on the issue. In a statement posted on her website, Mitchell wrote that she decided to pull her music from Spotify because “irresponsible people are spreading lies that are costing people their lives.”

On Feb. 1, former CSNY member released a statement of support for his friend Neil Young. On Instagram, he wrote about how “There is a difference between being open to varying viewpoints on a matter and knowingly spreading false information which some 270 medical professionals have derided as not only false but dangerous.”

Remaining CSNY bandmates spoke up the following day to ask their label to pull both their solo recordings and their group work from the streaming giant’s platform. In a joint statement, Crosby and Stills said, “While we always value alternate points of view, knowingly spreading disinformation during this global pandemic has deadly consequences. Until real action is taken to show that a concern for humanity must be balanced with commerce, we don’t want our music — or the music we made together — to be on the same platform”.

Research professor, lecturer, author of best-selling books Daring Greatly and Rising Strong, and host of podcasts Unlocking Us and Dare to Lead, announced that she was pausing her podcasts “until further notice”. In a statement on her website, she explained that she’d like Spotify to have “a transparent misinformation policy (made available to the public) that balances addressing the complex misinformation issues we face today while respecting free speech. And to be meaningful, this policy must be applied across the platform without exception.”

She also made it a point to say that she does not support censorship and that she “would never want to silence debate about vaccine safety and efficacy … However, rigorous debate that benefits the public does not include the dissemination of misinformation.”

“Both censorship and misinformation are threats to public health and democracy”, she added.

So, is Barbra Streisand leaving Spotify? The short answer is no. At least, not right now. But seeing as more and more artists are taking a stand against the streaming service’s less-than-satisfactory handling of misinformation dissemination, and given Streisand’s stance on vaccines, we wouldn’t be surprised if she followed in Young and company’s footsteps.