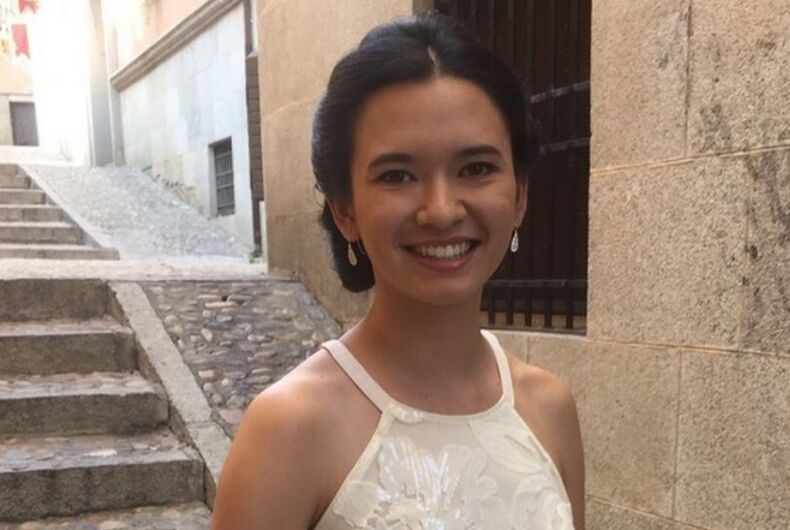 The mother of a lesbian who died by suicide after years of attempted conversion therapy is speaking out against the damaging and often traumatic practice.

In 2019, Alana Chen, 24, was found dead in a park in Colorado. Earlier in the year, she was interviewed for an article in a local newspaper about how a priest in high school put her through conversion therapy.

“I was feeling so much shame that I was comforted by the thought of hurting myself,” she said in that interview, just months before she died. She explained that she was raised Catholic and that the priest told her not to tell her parents when she came out and to instead accept counseling from him, which went on for years.

Her mother, Joyce Calvo, explained in a column for the National Catholic Reporter today that she knew that her daughter was harming herself since 2016, when a police officer had to take Alana to the hospital after a suicide attempt in a Catholic church.

Calvo wrote that the priest, Father David Nix, denied meeting alone with Alana behind her parents’ backs, but that Alana’s diary – and what she later told her mother before her death – contradict his denials.

“He gave her disturbing articles vilifying gay people and asked her to share intimate personal details about her sexual feelings,” Calvo wrote. “He insisted she could change her orientation. And that this would make her worthy to be a nun.”

She would later read in Alana’s journals about how she was told to date boys, dress more feminine, and quit sports.

“I’m so tired of being afraid of going to hell,” Alana wrote repeatedly.

“Why couldn’t they love all of me?” she wrote about people at the church, as her dream of becoming a nun seemed out of her grasp because of her sexual orientation. At one point, she carved the word “defiled” into her arm with a knife.

Calvo said that Nix moved away and that the Sisters of Life asked her directly to put Alana in conversion therapy and even suggested she see Janelle Hallman, a licensed therapist who has written a book about conversion therapy for women.

Calvo refused. “But by that time, years of damage had been done.”

After Alana’s first suicide attempt, she was diagnosed with acute post-traumatic stress disorder and depression, and Catholic churches would cause her to have panic attacks. Three years later, she died by suicide.

“As I write this, I am still in disbelief that my precious girl is never coming back,” Calvo wrote. “I won’t hear her sweet singing or watch her compete in a tournament. I weep at how her soul was tortured in the name of God.”

“The church must stop rejecting LGBTQ+ children. Since Alana’s passing, so many LGBTQ+ people of faith have reached out to me. I’ve heard their stories of rejection, failed attempts to change, self-harm and isolation.”

Calvo is speaking out now because she hopes that she can “alert Catholic parents to beware the devastating impact the church can have on their LGBTQ+ children” and “persuade people speaking for the church to abandon their misguided and dangerous attempts to alter what God has made.”