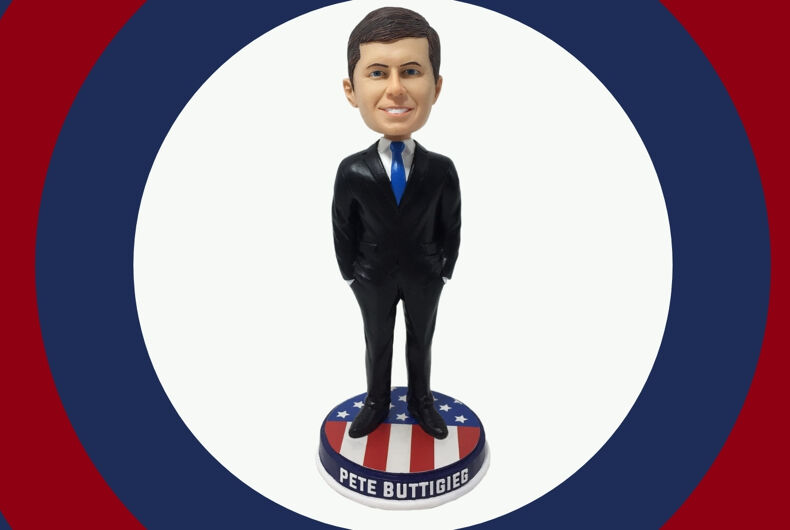 Photo: Provided by the National Bobblehead Hall of Fame and Museum

According to a press release, this marks the first time a bobblehead has been made of a U.S. Secretary of Transportation.

Related: A troll attacked the Buttigieg family. Chasten made sure he got what he deserved.

“We are excited to release the first bobblehead of Pete Buttigieg on National Bobblehead Day,” said National Bobblehead Hall of Fame and Museum co-founder and CEO Phil Sklar. “While he is currently the U.S. Secretary of Transportation, he will always be known as ‘Mayor Pete’ to the people in his hometown of South Bend, Indiana.”

The museum also celebrated Buttigieg’s accomplishments as the first out member of a presidential cabinet to be confirmed by the Senate, as well as the first out candidate of a major party to run for president to win a state’s primary.

It lauded his eight years of service as the Mayor of South Bend, Indiana, his degrees from both Harvard and Oxford, his role as a Navy lieutenant, his ability to speak seven languages, and his Rhodes Scholarship.

The $25 bobblehead is available for purchase in the museum’s online store. It features Buttigieg wearing a black suit with a blue tie, smiling from ear to ear and standing atop an American flag.

The bobbleheads are also individually numbered up to 2021, in honor of the year Buttigieg made history by becoming Secretary of Transportation.

Sklar told the South Bend Tribune that the idea for this bobblehead initially stemmed from the 2020 Democratic National Convention, which was supposed to take place in Milwaukee before it became virtual due to the pandemic. Buttigieg was supposed to be part of an exhibit of presidential candidates at the convention.

“We had to put it all on pause, but we looked back and wondered if people still would be interested,” Sklar said.

Sklar added that the current reigning champion of sales is Dr. Anthony Fauci. 50,000 bobbleheads of Biden’s chief medical officer have been sold. In second place is Loyola nun and basketball fan Sister Jean, followed by Bernie Sanders and his famous mittens.

Only time will tell how popular Buttigieg will become.

Take a look inside the Midwest’s newest megaclub