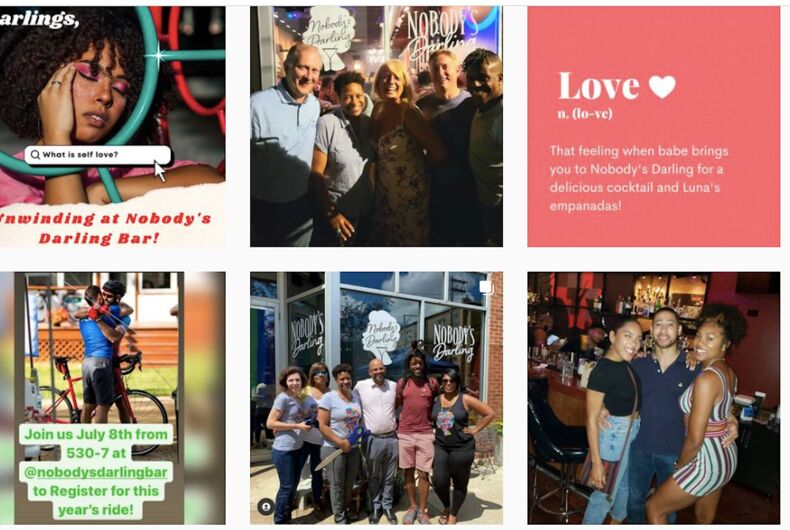 Last May, amid the pandemic and increasing calls to address racism in Chicago’s LGBTQ neighborhood of Boystown, two Black lesbian friends, Angela Barnes and Renauda Riddle, opened Nobody’s Darling, a queer bar in nearby Andersonville.

The bar is queer-owned, Black-owned, women-owned and looks unlike the other male- and gay-centric Boystown gay bars. In short, Nobody’s Darling has people rethinking how a progressive queer community can look and operate.

Related: There are only roughly 15 lesbian bars left in the U.S. & they’re fighting to stay open in 2021

The place is “a bar for irregulars,” according to gay author Richard Morgan, who recently profiled it in The Washington Post.

While gay bars often claim to be “inclusive” and “welcoming to everybody,” the patrons at Nobody’s Darling actually come from different generations and have varying sexual and gender identities, including trans-masculine people, asexuals and polyamorists.

The bar took its name from “Be Nobody’s Darling,” a poem by Black bisexual author Alex Walker. The poem goes (in part):

Be nobody’s darling;
Be an outcast.
Take the contradictions
Of your life
And wrap around
You like a shawl,
To parry stones
To keep you warm.
Watch the people succumb
To madness
With ample cheer;…

“Nobody’s Darling does not lack lighting, but lacks plenty else,” Morgan wrote. “No bouncer. No velvet rope. No bottle service. No DJ booth. No cage dancers. No sign explaining that only one person at a time is allowed in the bathroom.”

Barnes told Morgan, “We have a space where our only expectations are respect, relaxation and refreshment. It’s safe, and it’s resonating. There’s nothing aggressive about it.”

One 59-year-old lesbian patron said that going to a gay bar in Boystown makes her and her friends, “feel like an invader, invading their misogyny.” The gay men in Boystown will bully and grope women and unapologetically knock into them on the dance floor, the patron explained, adding that the bartenders also leave them waiting ages for a drink.

“It’s so disheartening to expect allies and get that treatment from them,” she said.

Nobody’s Darling opened at a time when Black and drag leaders in Chicago have been increasingly challenging the racism many have experienced in Boystown.

Black visitors can be made to feel unwelcome, The Chicago Reader wrote in a 2020 article about the area’s racial discontent. Black patrons sometimes have their IDs checked and are accused of violating dress codes more often. Bar owners have been accused of not hiring Black employees and making racist comments. Last year, one bar, Progress Bar, instructed its DJs never to play rap music, writing off an entire Black-led genre of music.

Keith Bucceri, the owner of local vintage store, Beatnix, has been accused of displaying a confederate flag vest on one of his store’s mannequins, telling employees to follow Black patrons around the store and of using anti-Black and anti-transgender slurs. He didn’t respond to The Chicago Reader’s repeated requests for comment.

Some white gay patrons in the area have also been quick to blame local Black residents for recent gay bashings, often hating on Black queers and residents in the process.

When a new group called the Chicago Black Drag Council held a town hall on racial issues in Boystown and a Black- and queer-led Drag March for Change through the neighborhood, their group’s flyers were vandalized. On social media, someone imposed the group’s leaders’ faces onto a photo of Nazis.

A 2020 petition to rename Boystown in order to be more inclusive was also met with widespread outrage, claiming that men were instrumental to the group’s founding. But this claim ignored that the first known gay community center in Chicago was created in part by a local chapter of the Daughters of Bilitis, the landmark lesbian civil rights group. The neighborhood is now officially known as Northalsted.

The city’s first feminist bookstore and a related women’s center were also organized locally by women, and people of color have long played a direct role both as residents of the Boystown area and fighters for LGBTQ rights.