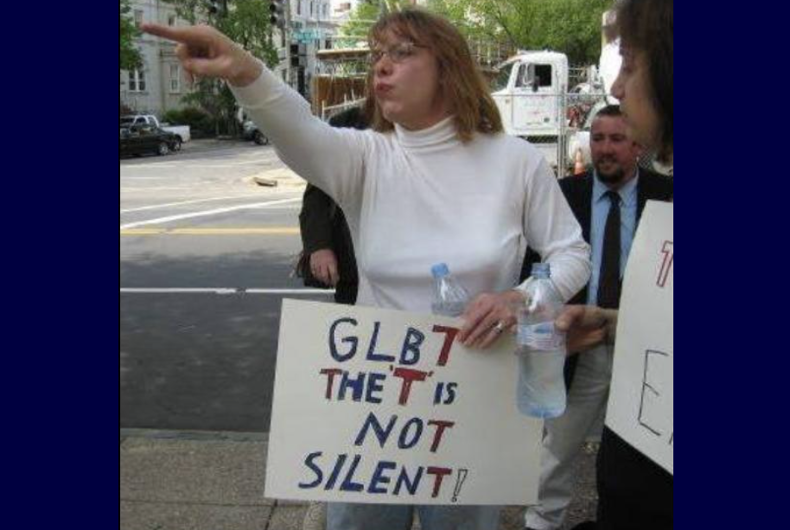 Journalist, radio show host, and advocate Rebecca Juro passed away on Saturday, December 17, due to complications resulting from lung cancer. She was 59-years-old.

“You have to fight for what you believe in,” Juro once wrote. “Nothing comes easy, and for a lot of the liberties everyone in this country enjoys, there were people behind them that fought to make them possible.”

Juro was one of those people.

Related: Why we need to be proud to be queer, now more than ever

“We live in a society where nobody wants to be different,” she said. “But we are different and that is okay. It was a fight back then and it still is to this day, but things seem to be getting better.”

Born in New Jersey in the early 60s, Juro would later say that she grew up under a lot of pressure to “be a rough and tough boy.” But she knew that she was a girl since she was five-years-old in 1967, back when “there was no such thing.”

She would turn to New York City’s punk scene and drugs when she turned 18, before moving back in with her mother in New Jersey and working a variety of low paying jobs.

In the 90s, she was in her 30s and just started to be able to communicate with other transgender people through the nascent internet, she recounted in a column for Al Día.

“I slowly started getting in contact with other trans people on the web, which was just getting started then and most of it was email lists and chat rooms,” she wrote. “At that point, I knew what I was, but I hadn’t figured out if this was something I could do.”

After a suicide attempt and reading the one book about being transgender that she could find at Barnes & Noble, she reached out to a transgender organization that connected her to a psychologist.

That changed her life: instead of living as society wanted her to be, she started living her truth. And the conflict in her life moved from the inside to the material transphobia of others.

Prospective employers, for example, “loved my resume, but when I actually showed up in their office, and they realized I was trans, things seem to change. It got to a point where I couldn’t even get a job in retail anymore, so I started writing and realizing the lack of representation and coverage in the transgender community.”

“The ‘T’ is not silent,” became her mantra as she spoke out against how the larger LGBTQ community’s organizations consistently turned their back on transgender people. She helped organize protests of HRC and lobby Congress. She worked with New Jersey AIDS and the Trans Lifeline.

“Sad news,” her brother Steve Juro wrote on Facebook on Sunday, “my sister Rebecca Juro passed away last night. She lived a tough, multi-faceted life that took her down a number of different paths.”

“She was a writer, a strong advocate for Trans issues, a companion for my mother, a punk rocker (Joan Jett groupie, see picture) and many other things,” he wrote. “We weren’t that close and we often saw things differently, but we were family and loved and accepted each other. She would always fight for what she believed. She was battling lung cancer, thought she was beating it, but then it took her. We will miss her and she will always be remembered.”

This tweet says it all: Ever an optimist, @BeckyJuro was a fantastic writer, long-suffering @Mets fan and one of my dearest friends IRL. Cancer sucks. But Rebecca Juro lives on in her words and in her hope for a better tomorrow. RIP, Becky. I loved you and you will be missed. https://t.co/E60iX7uoku pic.twitter.com/596HzasFNR

She was a force of nature. I will miss her.

Very sad to hear of Rebecca Juro's death. She was one of the consistent — and appropriately aggressive — trans voices in the queer media throughout the past two decades. RIP. https://t.co/IfGOfQaHqC

Madison Cawthorn to divorce after 8 months. He just told young conservatives to “get married young.”