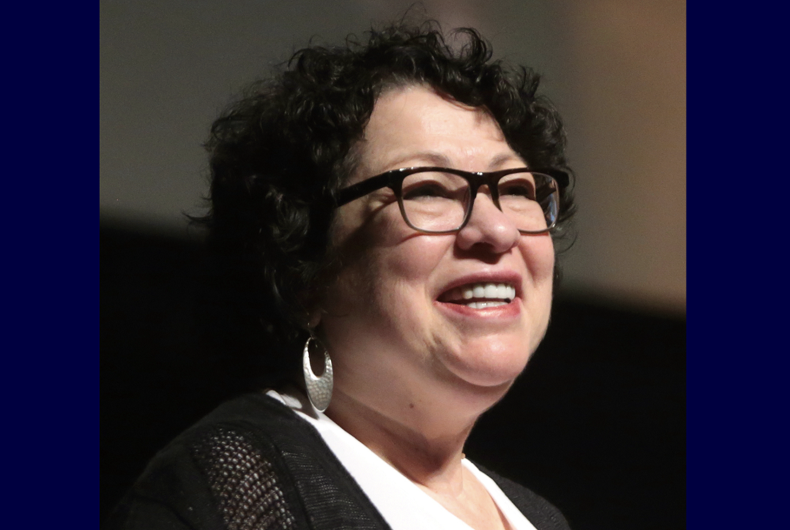 Supreme Court Justice Sonia Sotomayor practically accused a lawyer of lying when he said that he didn’t think that LGBTQ rights will be put in danger if the Court overturns the right to abortion.

Yesterday, the Supreme Court heard arguments in the Dobbs v. Jackson Women’s Health Organization, a case challenging Mississippi’s new ban on abortions after 15 weeks of gestation, a clear violation of Roe v. Wade, which guaranteed a right to abortion before a fetus is viable. The state is asking the Court to overturn Roe.

Related: The Supreme Court is hearing a case today that could lead to abortion bans in 26 states

Sotomayor, one of the Court’s three liberal judges, said that overturning Roe and Planned Parenthood v. Casey – another landmark abortion decision – would attack the very idea of a right to privacy. The Constitution doesn’t specifically name that right, but several cases since Roe have relied on the idea that the government should respect individuals’ rights to make their own decisions, particularly when it comes to moral or sexual issues that don’t hurt other people.

Sotomayor also brought up just how big of a change Mississippi is asking for in taking away people’s rights that they’ve grown accustomed to, something the Court has historically been loathe to do.

Justice Amy Coney Barrett asked Mississippi Solicitor General Scott Stewart, who was defending the abortion ban, about Sotomayor’s reasoning. Stewart said no, that LGBTQ and contraception rights won’t be overturned if abortion rights are because they involve “clear rules that have engendered strong reliance interests and that have not produced negative consequences.”

In other words, people have come to rely on the individual rights articulated in cases like Lawrence v. Texas (which legalized gay sex in all 50 states), Obergefell v. Hodges (which legalized marriage equality in all 50 states), and Griswold v. Connecticut (which protected some people’s right to use contraception) and they haven’t had the negative effects that he believes Roe has had.

That argument, apparently, wasn’t good enough for Sotomayor, considering there are people who rely on abortion being available and plenty of other people who believe that gay sex, marriage equality, and contraception have negative effects.

So she got as close to calling him a liar as one can get in the Supreme Court.

“I just think you’re dissimulating when you say that any ruling here wouldn’t have an effect on those,” she told Stewart.

She’s not alone. LGBTQ advocate Sharon McGowen of Lambda Legal told Bloomberg Law that LGBTQ victories like Lawrence and Obergefell “were built on the foundation of Roe and Casey and the Court’s other reproductive rights cases.”

The Christian conservative legal group Alliance Defending Freedom (ADF) said that abortion is different from contraception or LGBTQ rights cases because of “the state’ interest in protecting a child.” Of course, one similarity that abortion has to LGBTQ rights is that ADF itself opposes both of them and is considered an anti-LGBTQ hate group by the Southern Poverty Law Center.

McGowan noted that organizations like ADF that are “against LGBT equality are eager to leverage this case.”