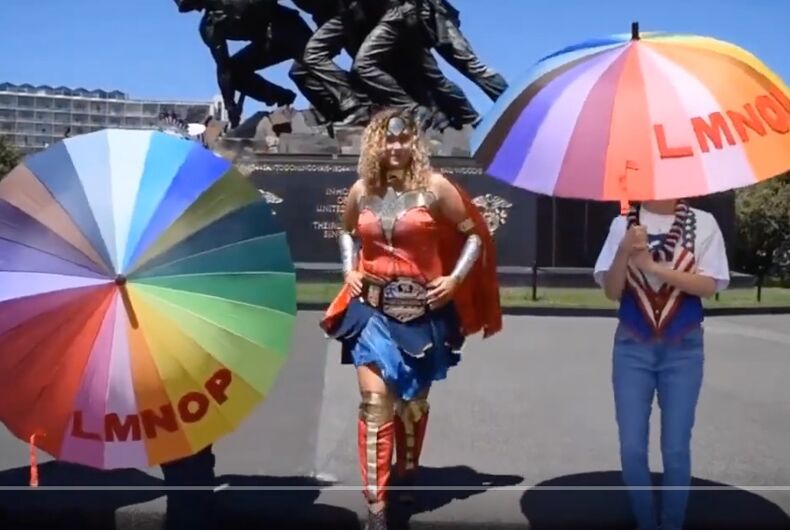 While Public Advocate USA is one of the most vicious anti-LGBTQ hate groups in the nation, their sense of camp is spot on. The group stages ridiculous “protests” that appear to be planned and executed by high school students while the spokesperson drones on and on about the dastardly people who want civil rights.

But this time they may have taken their schtick to new heights. They’ve made a video – complete with singing, dancing, and whirling umbrellas that spell out “LMNOP” – that celebrates Rep. Marjorie Taylor Greene (R-GA) as a modern-day Wonder Woman.

Related: Republicans are already laying the groundwork to overturn elections in 2024

As a boy sings an ode to Greene set to the Wonder Woman theme in a monotone, a woman with blonde hair in a superhero costume parades around in front of signs that read “Lifestyle Mainstream Normal Ordinary People” to illustrate how clever they are. Other signs read “Make the family great again!”

The faux Wonder Woman does battle with a woman draped in a Pride flag wearing boxing gloves. Her foe’s gloves have a rainbow stripe on one and a Black Lives Matter sticker on the other.

Announcing that they sent Greene a petition signed by 120,000 people to tell her how great she is, they praised her “national leadership for pro-family values and singular opposition to the Biden Administration and Homosexual lobby policies and outright attacks on most Christian families.”

They also praised her for “articulating daily on all media platforms the essential LMNOP+ (Lifestyle of Mainstream Normal Ordinary People) movements’ hope for normality not perversity being America’s standard.”

The group regularly sends out amazingly long fundraising emails that proclaim that transgender people are stalking their leaders, that they’ve found a warehouse full of gay men secretly plotting to advance LGBTQ rights, and that queer people “want to corrupt the minds and souls of our most vulnerable: young children.” The emails are stuffed with outrageous claims that any reasonable person would find laughable.

But from the folks standing behind Wonder Marge, there are several who are true believers. Which explains why they would think this video is an honor.

The anti-LGBTQ organization Public Advocate made a video celebrating Rep. Marjorie Taylor Greene as a modern-day Wonder Woman. Allow us to emphasize that this is 100 percent real and NOT A PARODY. pic.twitter.com/3q68JcjndU