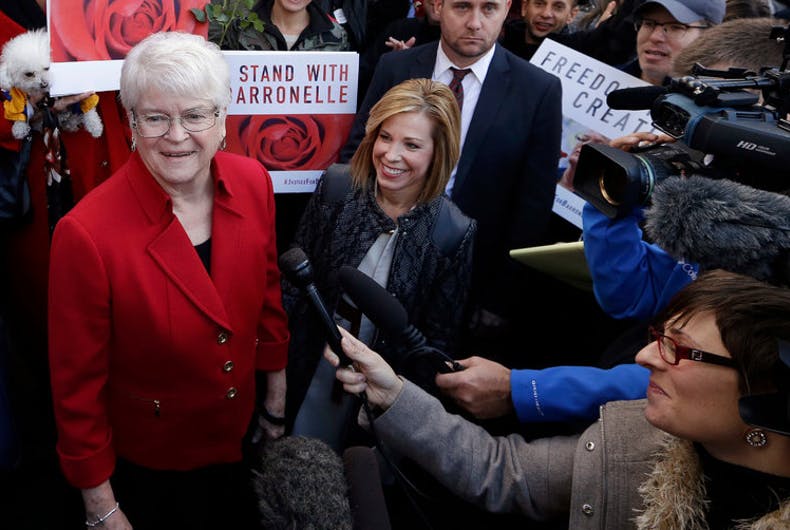 Barronelle Stutzman, the Washington state florist who refused to serve a gay couple in 2013, has dropped her Supreme Court case and will pay the men a small amount in damages. The money will be donated to an LGBTQ youth charity.

Stutzman says she is “at peace” with her decision to accept the ruling that she violated the state’s nondiscrimination laws.

Related: Trucks are driving around in Texas with huge signs that declare “Trans lives are precious”

Represented by the Alliance Defending Freedom (ADF), a group that serves as the legal arm of the far right and anti-LGBTQ hate groups, she had challenged the state’s public accommodations law. She claimed her “religious freedom” gave her the right to discriminate against the two men, and also said that being required to sell flowers that would be used in a same-sex couple’s wedding violated her freedom of speech because others would somehow interpret that sale to be an endorsement of the marriage equality.

“We are glad the Washington Supreme Court rulings will stay in place to ensure that same-sex couples are protected from discrimination and should be served by businesses like anyone else,” plaintiffs Robert Ingersoll and Curt Freed said in a statement. “It was painful to be turned away and we are thankful that this long journey for us is finally over.”

But Stutzman’s decision isn’t a change of heart. The florist “has chosen to retire so her beloved employees can run her business, Arlene’s Flowers,” her attorneys said.

Stutzman can “finally retire with her conscience intact, and she knows that the legal effort to protect the artistic freedoms of creative professionals.”

The Court is expected to hear other challenges to LGBTQ nondiscrimination laws eventually with the religious right making the effort a priority in recent years, citing their claims to religious exemptions to such laws.

The Court ruled narrowly in that case, focusing on other exemptions that the city of Philadelphia had granted other agencies.