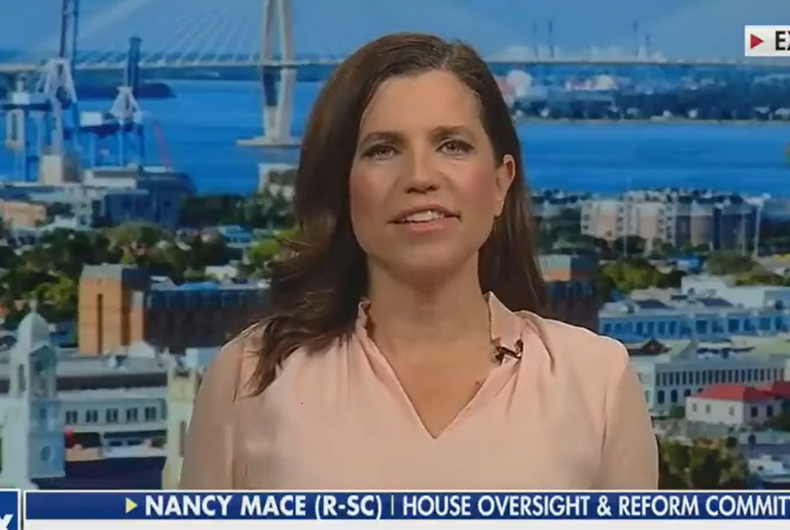 Rep. Nancy Mace (R-SC), who made headlines for her bizarre anti-transgender campaign ads, was caught over the weekend telling Fox News viewers that it’s not that important to get vaccinated against COVID-19 but then telling CNN viewers that she supports the COVID-19 vaccines.

“One of the things that the CDC has not done and no policy maker at the federal level has done is taken into account what natural immunity does, and that may be what we’re seeing in Florida today,” Mace said as she ranted about how “natural immunity” (that is, getting the COVID-19 illness) is better than getting a vaccine on Fox News this Sunday.

Related: Log Cabin Republicans endorsed some of the most anti-LGBTQ politicians running for office

She was talking about the drop in COVID-19 transmissions in the state of Florida recently. Florida Gov. Ron DeSantis (R) was criticized this past summer for banning local mask mandates and refusing to take other measures to stop the virus as hospitals were overflowing with sick people and morgues were filled beyond their capacity. Experts say that the previous wave has worked its way through part of Florida’s unvaccinated population and that it’s normal to see ebbs and flows in transmission rates.

But according to Mace, DeSantis was vindicated in his refusal to take any measures to stop the pandemic, even as he sues the Biden administration to stop the vaccine mandate.

“So we need to take all of the science into account and not selectively choosing what science to follow when we are making policy decisions,” Mace said, implying that the epidemiologists at the Centers for Disease Control and Prevention (CDC) simpley haven’t considered just letting people get the disease in order to gain immunity to it. “And you’re seeing Gov. DeSantis is seeing the fruit of that labor today.”

Mace changed her message when she appeared on CNN later that day.

“I have been a proponent of vaccinations and wearing masks when we need to,” she said when asked about whether she has been promoting vaccination in her home state. “I’ve been encouraging my district to go and get vaccinated…. We need to take every precaution from washing our hands to wearing the N95 or KN95 masks.”

She said that she got COVID-19 in 2020 and she is “a long hauler” and is “still feeling the repercussions a year and a half later,” discussing how she was recently diagnosed with asthma, possibly related to the damage that the COVID-19 disease wrought on her lungs.

Mace was effectively explaining the second main reason why relying on “natural immunity” to end the COVID-19 pandemic is problematic: even people who survive the disease can suffer long-term consequences that can impact their health. (The first is the 777,000 Americans who have died so far due to this disease, the vast majority of which were unvaccinated.)

“I want to encourage the American people to talk to their doctors and talk about getting vaccinated,” she said.

Nancy Mace is on Fox News suggesting that people should get Covid rather than get vaccinated because natural immunity is preferable.

Take a second to ponder how irresponsible that is. pic.twitter.com/W1AfDZQEb1

Hours after speaking out on behalf of natural immunity and against mandates on Fox News, Nancy Mace joined CNN and said she's a big proponent of vaccines pic.twitter.com/wQQUxfDSqw

Mace was first elected to Congress just last year, and she made transgender people serving in the military a campaign issue. She ran a television ad claiming that her Democratic opponent, former Rep. Joe Cunningham (D-SC), worked with Speaker Nancy Pelosi (D-CA) to pass “a law requiring transgendered [sic] equality in the military, a liberal mandate that will close [the Marine Corps base at] Parris Island.”

There is no such law; transgender people were not allowed to serve openly in the military when the ad was produced and that ban was lifted this year by the Biden administration without an act of Congress.

Mace also retweeted claims that Sen. Lindsey Graham (R-SC) is a “Nancy boy,” which many speculated was a reference to rumors about Graham’s sexuality.

Despite saying that she is in favor of wearing masks, Mace made headlines earlier this year when she taunted Pelosi over the House’s mask mandate: “Madame Speaker, come and get me.”

Chile elects their first transgender official to their national legislature