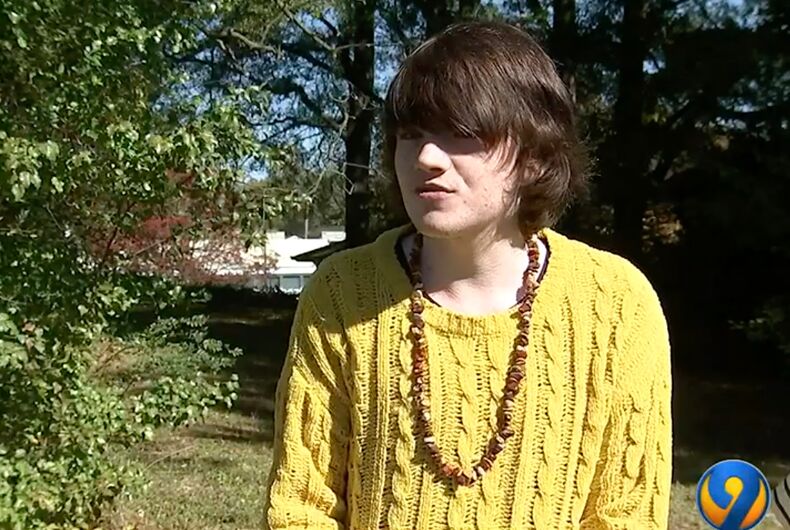 A transgender high school student in North Carolina is speaking out after bullies secretly recorded him using the bathroom and shared the videos on social media.

16-year-old Clay Sentell had no idea he had been recorded until a friend showed him the videos that other students at Burns High School were already sharing.

Related: Transgender student attacked by bully as classmates laughed and shared video of it

“I felt like my privacy was invaded. I was terrified,” Clay told The Shelby Star. “The way I dress doesn’t equal my gender identity. I know a lot of people see those as hand in hand. [My clothes] are just how I express myself; it is how I want to be. The fact I am being recorded in the bathroom for it is insane.”

One video reportedly shows Clay washing his hands. The person who recorded it mocked him for wearing high heels.

Another student recorded Clay’s shoes while he was in a bathroom stall.

In one of the videos, a classmate was tagged. Clay’s mother Annie Sentell believes it is the students’ way of playing a cruel game.

On a Tuesday, Annie added, she tried to set up a meeting with school administrators, but they told her it would have to wait almost a full week, until the following Monday.

As such, Clay and his sister Abby decided to protest in front of the school. The siblings wore signs calling attention to the unsafe environment.

“Help protect me today,” Clay’s sign read, “Because my administrators won’t until Monday! No flash photography!”

“Help protect me”
A transgender student wears a sign to Burns High, Lawndale, after learning students secretly shared video of the student in the bathroom. Clay Sentell & mother Annie said school officials were slow to respond to complaints about the violation. “I was floored”. pic.twitter.com/uo91Wfn65L

The school then called their mother to say their protest was too distracting, which she told WSOC-TV made her angry.

Ultimately, Annie was too frustrated to attend Monday’s meeting and instead decided to keep Clay home from school.

She said she no longer feels comfortable sending her son to that school and is looking for other options.

“We want to know what his rights are and what can be done to make this right,” she said.

In the meantime, Clay said that he is praying for the students who targeted him.

“Does that mean I’m going to just let this go? No. I’m still going to love you, and it’s not my goal to hate anybody like that. I just pray for them to be more open and more accepting.”