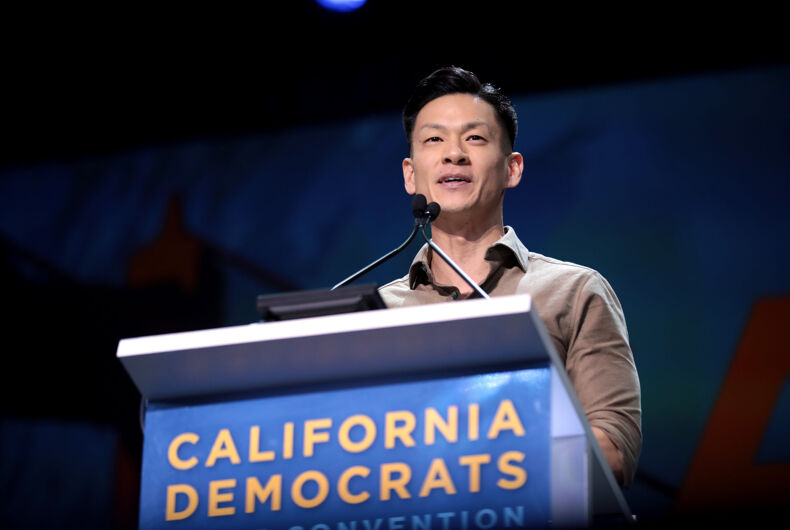 California Assemblymember Evan Low (D), who is out and a rising figure in the Democratic Party, was removed as the chair of the State Assembly’s Business and Professions Committee this week and replaced by another legislator. No reason for the abrupt change has been offered publicly, leaving many to speculate as LGBTQ advocate groups and other progressive organizers condemn the decision and lack of transparency.

Neither Low or California Assembly Speaker Anthony Rendon (D), who ordered Low’s removal, have explained the decision, although Low did issue a statement saying in part that it “has been an honor to serve as chair” and Rendon expressed his support for Low’s replacement.

At the time, both Low and Berman were representing the state in Washington, D.C. as part of a delegation of lawmakers to meet with federal officials.

Looks like @AsmMarcBerman will replace @Evan_Low as chair of the Assembly Business and Professions Committee.

Statement from @RendonAnthony: “I’ve asked Assemblymember Berman to take the helm of Business and Professions." 1/2 pic.twitter.com/Kcc5S8LoRX

I asked why Low was removed as B&P chair, and was told that the speaker “makes periodic changes to committee chairs.” Berman currently chairs the Elections committee, and a “new chair has not been determined yet for elections but hopefully there will be an announcement soon.”

As of publication, Low remains a member of the Assembly’s Communications and Conveyance, Elections, Governmental Organization, and Higher Education Committees. His removal makes him ineligible to serve as the chair of any other committees for the rest of the current term, however.

Local ABC affiliate KXTV reports that sources tell them that the decision was a “vindictive” move by Rendon “because the speaker wanted revenge.” The unnamed sources cite rumors that Low considered running for Assembly Speaker for this term, leading to resentment.

Rendon did not respond to such claims, but issued a statement saying he believes Berman’s “service in the Assembly has demonstrated his commitment to the Democratic Caucus. As a B&P committee member, he has shown mastery of the subject matter and I know I can depend on him to dedicate his time and focus to leading the work of this important committee.”

The swift and unexpected decision comes as reports indicate that redistricting may put Low and Berman in competition for the same seat.

“We are deeply disappointed to see Assemblymember Low removed as Chair of the Assembly Business and Professions Committee without any explanation,” Equality California director Tony Hoang said in a statement. “At a time when the API community faces a surge in hate, violence and discrimination, and state legislatures across the country relentlessly attack the LGBTQ+ community.”

He added, “Removing Assemblymember Low as chair is an unfortunate example of people of color — especially API people — being sidelined from leadership roles despite demonstrated success and a commitment to strengthening and diversifying the Legislature.”

"We are deeply disappointed to see Assemblymember @Evan_Low removed as Chair of the Assembly Business and Professions Committee without any explanation." (1/4) #caleg

"He has chaired the B&P Committee for the last five years with policy-driven and solution-oriented leadership." (3/4)

Equality California isn’t the only group taking issue with the decision. The LGBTQ Victory Institute, the the Bay Area Municipal Elections Committee (BAYMEC), and OCA-Asian Pacific American Advocates were among those who issued statements in response to the decision.

“To remove Evan Low – the only out LGBTQ AAPI committee chair in the Assembly – from his position without explanation is problematic, especially with no other LGBTQ people serving as chairs,” Annise Parker, President and CEO of the LGBTQ Victory Institute, said. “At a time when the LGBTQ community and the AAPI community face increasing harm, we need more bold leadership like Evan Low’s, not less.”

The Los Angeles Blade reports that sources tell them Rendon is “stripping him [Low] of his chair” as a “ridiculous” and “petty move that smacked of revenge.”

“Look its clearly revenge,” a legislative staffer is quoted as saying to the Blade.

The San Francisco LGBTQ outlet Bay Area Reporter also has been told by sources that Low had no advance knowledge of Rendon’s decision, and he had not received an explanation or even a courtesy call from Rendon regarding the change.

The issue all stems from “entities” approaching Low over the summer to ask him to run for Speaker and replace Rendon, who has drawn criticism for management of the Assembly throughout the COVID-19 pandemic, and Rendon may have concerns that he would lose if a contest is held.

Despite that, the sources report to both publications that Low declined the invitation at the time and has previously fundraised for Rendon.

The Blade also reports that one non-profit leader contacted Rendon via text with his concerns, and that the Speaker only responded by saying, “Message received.”

Sources expect the issue to spill over into the Assembly session when it resumes, and believe it’s likely the topic gets put on the record, which may result in Rendon’s leadership being called further into question.

Low issued a statement through his office, saying, “It has been an honor to serve as chair of the Assembly’s Business and Professions Committee, where my colleagues and I crafted legislation to help small businesses, combat the opioid crisis, implement a system to regulate legal cannabis, and work with Governor Newsom to protect patients and health professionals during the COVID-19 pandemic.”

He has not offered any other direct comments on the controversy.

Low began his political career as a city councilmember in the small time of Campbell, California. He became mayor in 2009, making him the youngest gay mayor in the nation at that time. Once a Victory Institute Leadership Fellow, Low became the Assemblymember for part of Santa Clara County, which also encompasses Silicon Valley, in 2014. He has held the seat since then and can do so until he is restricted by term limits in 2026.

At one time, he had the most legislation signed into law by the governor of California in one session and he has received honors from tech industry leaders, LGBTQ leaders, and politicians such as California Gov. Gavin Newsom (D).

Berman, a lawyer and human rights advocate, currently represents parts of Santa Clara and San Mateo Counties, including Palo Alto and Cupertino. He has been in office since 2016 and originates from Texas.

Assemblymember @Evan_Low remains a key leader and representative for both the AAPI and LGBTQ+ communities. Stripping him of the position moves California backwards in its work to protect and serve its constituents, many of whom are AAPI.

We are shocked and confused by Speaker @Rendon63rd’s inexplicable decision to remove a leader like Asm. @Evan_Low from his role as Chair of the Business and Professions Committee without explanation. This is counter to CA’s commitment to equity. #CALeg https://t.co/VkcFdJP36q

BAYMEC is shocked and outraged to learn that Assemblymember @Evan_Low has been removed as Chair of the Assembly Business and Professions Committee by Speaker Anthony Rendon with no explanation. @SpeakerRendon @Rendon63rd

Assemblymember Low is a consistent champion for equal rights and the inclusion of all LGBTQ+ people and represents the kind of leadership we hope to see from the Democratic Party now and in the future.

(1/3) Statement from @AnniseParker, LGBTQ Victory Institute President & CEO: "Speaker Rendon has the right to replace any committee chair, but he also has the responsibility to explain why… https://t.co/RjJ5tBUz9h

"At a time when the LGBTQ community and the AAPI community face increasing harm, we need more bold leadership like @Evan_Low's, not less."