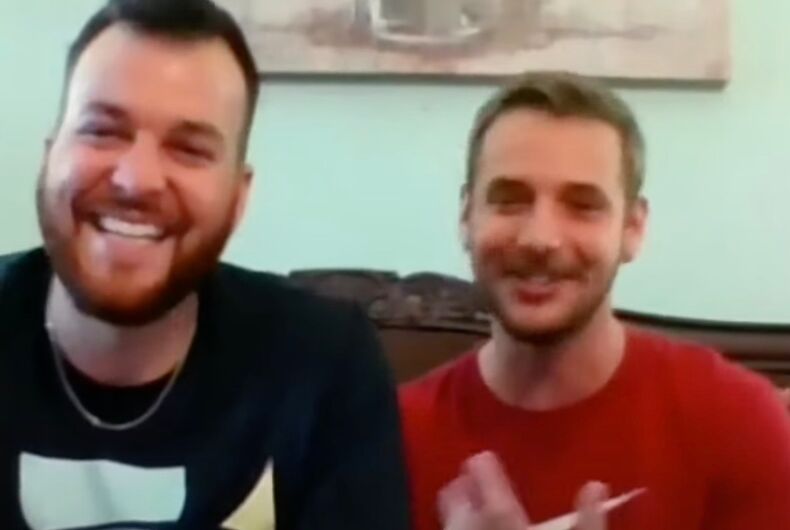 When Reid Alexander matched on Tinder with Rafael Díaz last year, he had no idea the connection would lead to both a new husband and a new kidney.

At 17 years old, Alexander was diagnosed with Alport Syndrome, a disease that causes damage to the kidney’s blood vessels and can also result in hearing loss and eye problems.

When he was 24, Alexander found out his kidney function was only at 20 percent, meaning he was eligible for a transplant. Around the same time, he moved to Denver, started a job as a fitness instructor, and swiped right on Díaz.

The pair fell madly in love. About one year later, on April 9, they were married.

Díaz knew about Alexander’s condition early on and had said from the start he was interested in finding out if he was a match.

At first, Alexander was hesitant.

“I was like, ‘No, no, that’s so amazing, but you don’t have to do that,'” Alexander told NBC News. “I mean, we were only dating a short while,” Alexander said. “But he would keep talking about it. It felt like such a serious thing: You’re giving me your organ.”

But as Alexander’s condition deteriorated, Díaz couldn’t take it anymore and decided to get tested.

As it turned out, he was a perfect match.

The couple went into surgery on August 13 at Indiana University Health Methodist Hospital. The procedures went well, and they have since been recovering nearby at the home of Alexander’s parents.

Because they have been unable to work while they recover, they have set up a GoFundMe seeking support.

Alexander told People that after the surgery, he cried every time he saw his husbands face.

“I don’t think there’s anything that I can do that shows my appreciation,” he said. “It means so much because to me, he made the ultimate sacrifice. He gave me an organ so that I can live a better life [and] be healthy. And that’s just so amazing.”

Díaz added that anyone who is capable of donating an organ should absolutely do it.

“You can help families. You can help people. You can help to change the life of someone else and [give] someone the opportunity that they didn’t have before. If you can do it, do it.”

How the number 41 became an anti-gay slur in Mexico