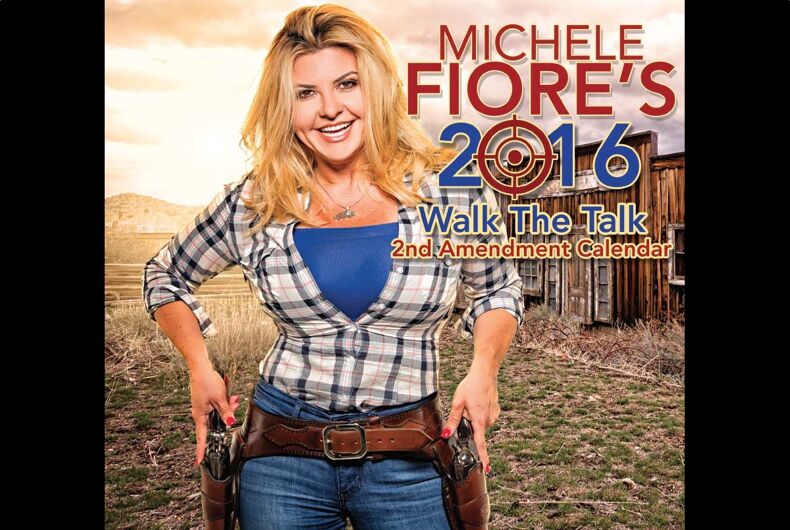 She was the only state Republican to support lifting Nevada’s ban on same-sex marriage. However, her pro-militia and anti-immigrant views cement her right-wing alignment.

Fiore has served in Nevada’s state Assembly from 2012 to 2016. Before serving, she wrote, directed, produced and starred in a 2005 movie, Siren, about a bored housewife that becomes a rock singer.

Fiore once co-owned a home health care business with her lesbian mom, though it was shut down in November 2015 after she refused to let the Nevada Department of Health and Human Services’ Bureau of Health Care Quality and Compliance inspect it.

She also served in the Nevada Leadership Team for Ted Cruz, the Texas Republican senator who has consistently opposed equality for LGBTQ Americans and thinks being LGBTQ is a choice.

She’s a self-proclaimed fan of deceased anti-LGBTQ conservative talk radio host Rush Limbaugh. She also believes that cancer is a fungus that can be cured with saltwater.

“If you have cancer, which I believe is a fungus, and we can put a pic line into your body and we’re flushing with, say, saltwater, sodium carbonate, through that line and flushing out the fungus,” Fiore said on her radio show Walk the Talk in early 2015. “These are some procedures that are not FDA-approved in America that are very inexpensive, cost-effective.”

Ammon Bundy has since gone on to found People’s Rights, a militarized social movement that has “whipped up paranoia and rage, risking lives of hospital workers, health officers, politicians and others in the crosshairs,” The Los Angeles Times reported. Extremism experts say has significant overlap with white supremacist groups and other far-right organizations.

In support of deceased militia member LaVoy Finicum, Fiore spread a questionable claim through her social media that he had his hands up when he was gunned down by federal agents in 2016. Two witnesses said he charged at the agents before they shot him.

“If these young, hot little girls on campus have a firearm, I wonder how many men will want to assault them,” she said in a 2015 interview with The New York Times. “The sexual assaults that are occurring would go down once these sexual predators get a bullet in their head.”

Guns do not reduce the likelihood of rape, according to The Orange County Rape Crisis Center. In fact, a woman with a gun is far more likely to be murdered by her attacker than to defend herself against assault, the center said.

Regardless, Fiore doesn’t just support shooting rapists. She also supports shooting Syrian refugees. Although many Syrian refugees were once fighters who aided U.S. forces and allies trying to stabilize the region during the country’s years-long civil war, she considers them all terrorists who she’d rather kill than let inside the United States.

“I am not OK with Syrian refugees,” Fiore said in November 2015 on her radio show, according to the New York Daily News. “I’m not OK with terrorists. I’m OK with putting them down, blacking them out, just put a piece of brass in their ocular cavity and end their miserable life. I’m good with that.”

Lastly, her racial comments have raised eyebrows. She has claimed that Democrats and liberals are using race to divide America. “We have Black Entertainment Television. What would happen if we started White Chick TV? Are you kidding me?” she once asked.

Despite seeing racial issues as “divisive”, in 2015, she called a fellow Nevada lawmaker “colored” and told him to stop talking about “the race issue” during a hearing on a voter ID law, The Las Vegas Sun reported.

During a June 2020 Republican convention, she reportedly spoke against affirmative action initiatives by saying, “If there’s a job opening and my white ass is more qualified than somebody’s black ass, then my white ass should get the job,” The Nevada Independent reported.

Clark County Republican Party Chairman (CCRP) David Sajdak condemned her comments, calling them “irresponsible, insensitive and inaccurate” and asking her to apologize to the community at large. She doubled down, calling the criticisms “rubbish” and adding, “If anyone in the CCRP is offended by the word ‘ass’ or my New York Style, my apologies.”

She also supports efforts to audit Nevada’s 2020 election results, furthering the baseless claims of widespread voter fraud that led supporters of Donald Trump to raid the U.S. Capitol on January 6 in hopes of overturning a legitimate national election.