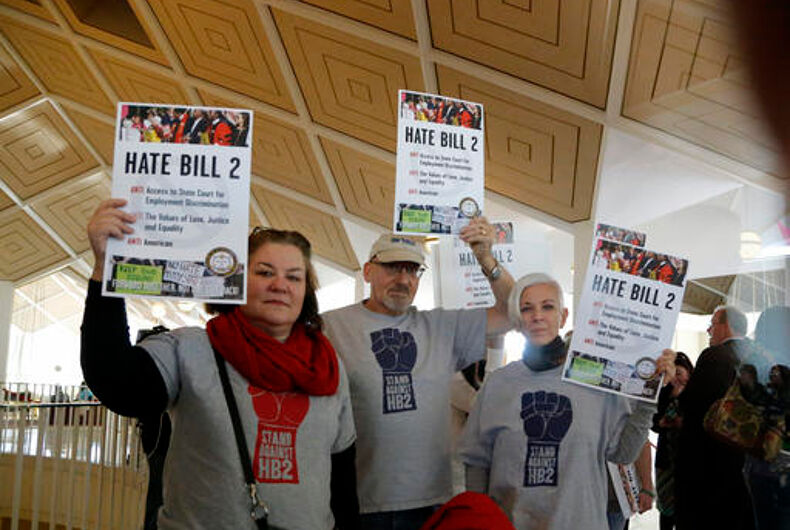 North Carolina Democratic candidate Charles Graham is apologizing to the LGBTQ community for his previous vote in favor of the state’s infamous anti-trans bathroom law. The law required transgender people to use facilities that correspond to the gender they were assigned at birth.

Deemed the most extreme anti-LGBTQ law in the country, it spawned national outrage – and copycat legislation by Republicans. Only 11 Democratic state representatives voted in favor of the measure, joining 71 Republicans to pass the obviously discriminatory law in less than 12 hours.

The state senate also took up the matter quickly, and Gov. Pat McCrory (R) signed it into law within 24 hours.

Graham, who is now running for Congress, quickly realized what he actually voted for, and stumbled his way through an explanation shortly after he cast his vote. A local outlet called Graham to ask why he voted to support discrimination, and quoted him verbatim.

“Uhhhh… well… uhhhh… H.B. 2… uhhhh…. I voted in favor of that, uh, HB 2, because I was concerned about the safety of our citizens in, um, restrooms. Um, I think it, um, certainly opened the door of opportunity for individuals to, uh, of, uh, of the ordinance, um… and, meaning that, you know, predators, and… folks that had, uh… uhmmm… other intentions would have been allowed to take advantage of that ordinance and certainly wanted to, take care of the, my number one concern was taking care of the safety of our children, ummm, and our citizens in, in, in, in… in public restrooms or private, uh, for that matter,” he mumbled.

“Uhhhm. Well… in this case, public. Um. I wanted to, uh… I felt that the constituents that I represent would want me to vote that way, and of course, uhhhh, I’m, uh, um… you know, a representative of the people of Robeson County, and, umm, I certainly had a lot of, um, folks who encouraged me to not support, support that ordinance, because it would, could have had statewide implications. Of course… uh… that’s why, um, I voted the way I did.”

But Graham was much more clear with his apology. On his campaign website, he made it clear that he made a huge mistake – and deserves to be held accountable.

“I believe human dignity is a human right. It’s a value I hold dear – but five years ago I failed to uphold my own value when I voted for HB2, and it was a mistake. It was a bill written and voted on within 24 hours, with the conversation surrounding protecting children and women, but I should have done more research to completely understand the impact of the bill. After the hurried vote, I spent the following days talking with colleagues and transgender-rights activists about the impacts of the bill – I became a full supporter of recalling the bill and worked across the aisle to fully repeal it. To the LGBTQ+ community, and specifically to the transgender community who suffered real pain from this bill and the rhetoric that surrounded it, I am sorry.”

“I have always tried to do what is right, but I am not perfect. I’m running for Congress to stand up against hatred and ignorance, and I expect to be held accountable when I fail to live up to my own principles.”

McCrory’s vehement opposition to LGBTQ right and the subsequent fallout, cost him the election. Democrat Roy Cooper replaced him and made it a priority to “replace” the law with another that repealed the bathroom section but still banned cities from passing local nondiscrimination ordinances that included transgender people.