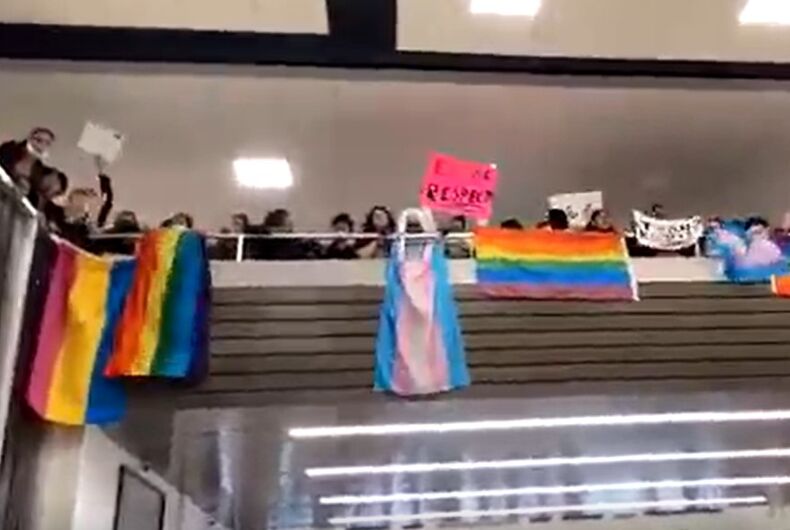 A transgender student was allegedly blocked from using the locker room at a Texas high school, and her classmates rallied for her, organizing a walk-out and protest in support of transgender equality on Wednesday morning.

Video of the protest has been shared on social media, showing the students waving transgender and rainbow pride flags in a hallway and chanting while a teacher shouts at them “Go back to class!”

The protest took place after a 16-year-old transgender Temple High School student posted on Instagram on September 22 that she tried to use the girls’ locker room, but a teacher blocked her and told her that she couldn’t use it even though she’s a girl.

The Instagram post got 4000 likes and students used social media to call for a “transgender rights protest.”

Several videos of the protest were shared on social media.

“Additional security and Temple PD were on campus to help ensure the safety of staff and students,” Temple Independent School District spokesperson Christine Parks told KCEN TV, who added that protests are allowed but skipping class is not.

Parks said that the school has a policy for transgender students that includes requiring transgender students to use a gender-neutral restroom and locker room, similar to the policy used at the Virginia school that was sued by student Gavin Grimm, where he was singled out and forced to use a custodial closet as a bathroom as a gender-neutral alternative. The Virginia school district lost the lawsuit.

The Temple ISD policy also requires transgender students to “dress in accordance with the dress code” and to be identified by their “legal surname,” although it’s not clear why either of these is relevant to a transgender student policy.

Parks said that the student who was denied access to the locker room and her parents met with school administrators so that the school could reiterate the discriminatory policy.

My university has been targeted by white supremacists. This is what I’m sharing in response.