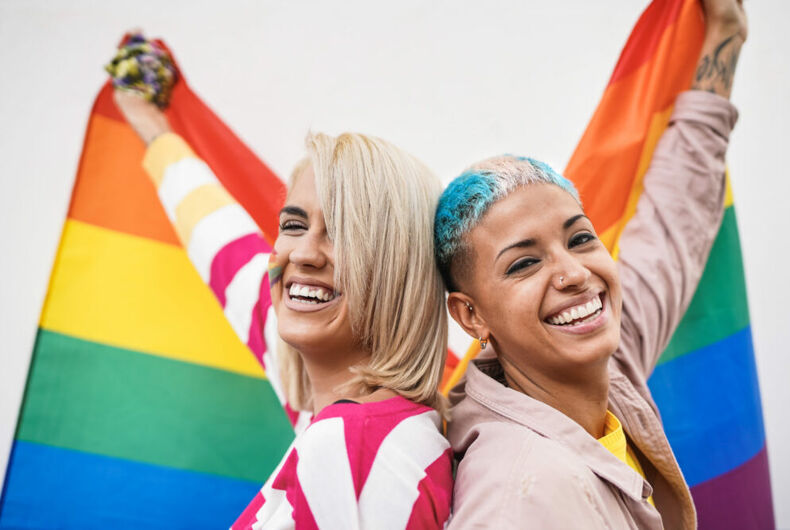 It is undeniable that heterosexual, cisgender women have been the target of legislators who want to deny abortion access and restrict reproductive health care and those attacks are rooted in sexism, racism, xenophobia, classism, and ableism. However, it is incredibly dangerous to think attacks on access to abortion and reproductive healthcare only impact heterosexual, cisgender women.

At the end of this year, the Supreme Court is slated to hear oral arguments for a case that could threaten our constitutional right to safe and legal abortions – Dobbs v. Jackson Women’s Health Organization.

This Mississippi-based case could restrict access to safe abortions for everyone, with particularly devastating impacts on LGBTQ people, transgender, and nonbinary people, Black people, and people who live in rural areas. Already, around the country, states have introduced dozens of harmful bills restricting a person’s right to access safe abortion.

For me, this is very personal. My sister became pregnant at 16 and I watched her navigate judgment, ridicule, and challenge every step of the way to make her own choices about her body and her life.

It is a lie when we hear that denying basic civil and human rights is in the best interest of children or in the service of protecting women.

This fight has never just been about abortion but about freedom from the tyranny of a State that picks and chooses how to control our bodies at will.

Each of us lives an intersectional life where our identities are perceived in different ways and people who hold multiple marginalized identities face tremendous discrimination and barriers to healthcare simply because of who we are.

The “overlap” of reproductive rights and queer rights is as real as the women who are denied bodily autonomy for either – or both – identities they hold. It is real for our trans and non-binary siblings who often can only find culturally competent healthcare in the very same places being attacked for providing health services to women seeking an abortion or birth control.

Bi+ identified folx make up a large percentage of our LGBTQ community, so this is not just philosophical or theoretical, it is real. For those seeking a pathway to becoming whole after surviving sexual violence – it is real. And yes, for cisgender gay white men, your sexual freedom and agency are under attack as well. We are all in this struggle together – to win, we must be.

At the National LGBTQ Task Force, we have long worked at these intersections and help to address LGBTQ peoples’ reproductive healthcare needs. We work to ensure that LGBTQ voices are lifted in reproductive justice advocacy and that reproductive justice issues are addressed in LGBTQ spaces. Our diverse staff comes to us with experience in repro rights, myself included, and we connect the dots on everything from access to assisted reproductive technologies, abortion rights to inclusive sex-ed for LGBTQ+ youth.

That is why we’re joining the Women’s March on October 2nd to rally for abortion justice. Organized in response to the Supreme Court’s refusal to block a harmful Texas law effectively banning abortions after six weeks, the Women’s March is one of many events planned in response to the ban. We will march in October and we will continue to advocate for and highlight this issue as one that has a monumental impact on LGBTQ people and families.

With a conservative-leaning Supreme Court, it is imperative that we make our voices heard and remain vigilant in holding all branches of government accountable. We must do what we can to ensure that the Supreme Court makes the right decision and reinforces the principles that have been decided in cases like Roe v. Wade and Planned Parenthood of Southeastern Pa. v. Casey – principles that protect a person’s safe and legal access to abortion.

We must all understand, care and act as our civil and human rights continue to be targeted and whittled away at the local, state, and federal levels. Civil rights leader Fannie Lou Hamer said, “nobody’s free until everybody’s free”. The sooner we acknowledge this truth and join forces the more impact we can have on these escalating attacks.

Agency, self-determination, equity, and freedom hang in the balance but together we have the power to win.

Lauren Boebert accuses Joe Biden of being a pedophile