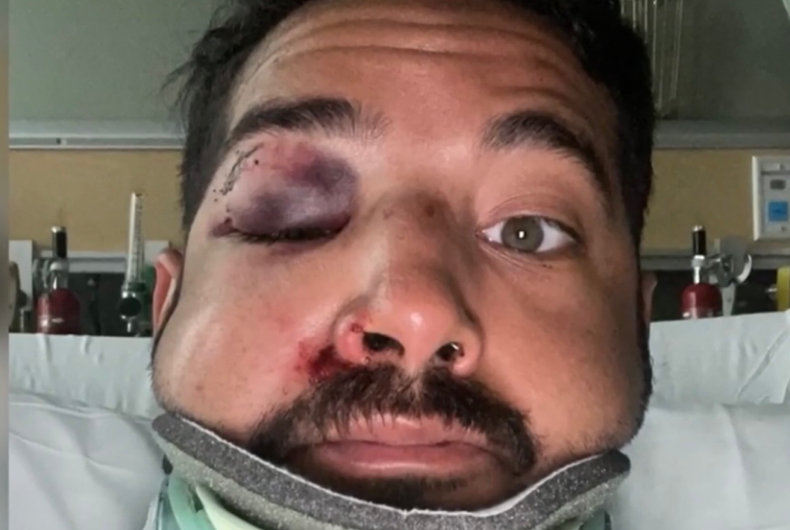 San Diego Police are currently investigating a recent attack just off the piers of a city park that has left a gay man with a spinal cord injury, a fractured eye socket, and a broken nose. Police are investigating the attack as a hate crime.

Gersson Saavedra is currently in the hospital recovering from the severe injuries. He’ll be out of work for weeks and has started crowdfunding for his pending hospital bills as a result.

Saavedra was taken to the hospital the evening of September 12, although he doesn’t remember much of the attack and learned much of what happened through his friend’s recounts.

“I was at the pier over by Cesar Chavez Park in Barrio Logan. When we were leaving the event I fell behind my friends, Martin and Sunny,” Saavedra told NBC San Diego.

“My friend said that these two guys asked me for a lighter. By the time they, like, turned around, I was getting, you know, punched. I was basically hitting the floor at that point,” he continued.

During the beating, the two men yelled slurs such as “faggot” at Saavedra and other profanities.

The two men then ran off, leaving Saavedra unconscious and in brutal condition without any clear explanation.

Later, he shared that the “First thing I remember when I woke on the hospital bed is that one of the doctors asked me if I was gay.

“I was like, that’s such a weird question to ask, but I said yes, of course. And he was like, ‘Okay, you were a victim of a hate crime.’

“You hear about these things like happening in the gay community, but you know, you can never kind of prepare or expect something like this to happen to you,” Saavedra said.

Saavedra will need surgery on his nose, which is scheduled for next week, but he will already missed at least six weeks of work trying to physically recover from the beating.

Still, Saavedra is in good spirits. He offers beautiful words for other people that may become victims of hate crimes: “It’s easy to kind of blame yourself, think could have prevented this, maybe by being less of yourself, but I would definitely say don’t let anyone or even this type of situation dim your light.

“Always, you know, just be yourself.”

He offered no words publicly for his alleged attackers.

15 percent of hate crimes in the Golden State in 2020 were based on sexual orientation, out of all the hate crimes reported by the California Attorney General’s Office, which saw a 31 percent surge last year than to 2019.

San Diego Police ask anyone with information to contact them by calling (619) 531-2000 with hate crime information.

Gissel Saavedra, Gershon’s younger sister, has organized a GoFundMe for him. The fundraiser has already received $12,000 in pledges so far.