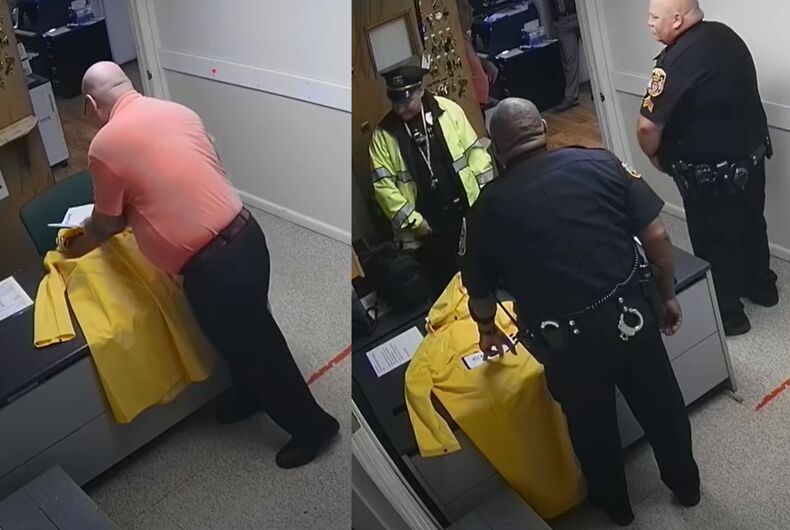 Surveillance video from this past Friday shows Campo carrying a piece of paper with the words “Ku Klux Klan” and laying it on top of a yellow jacket on the officer’s desk. The jacket, according to Cleveland.com, was laid out to look like a robe and hood.

Campo stays near the desk and the Black officer who works there comes in seconds later and sees the message. Campo comes back and talks with the officer, and other officers come to talk to them as they gesture towards the jacket. The surveillance video has no audio, so what they are saying is not known.

The victim has been working at the department for nine months.

Sheffield Lake Mayor Dennis Bring said that Campo resigned on Tuesday. Campo had been with the department for 33 years and served as chief of police for eight years.

Bring said that Campo said it was meant to be a prank.

“He thought this was just a joke,” the mayor said. “How can you possibly think that you can put something on somebody’s jacket like that, and especially if they were African American, and think this is a joke? This is the most egregious and offensive thing you could possibly do. And it’s embarrassing and disgusting.”

He said he found out about the incident when the police union brought a complaint of harassment to Sheffield Lake Law Director David Graves, who then told Bring about it, calling it “really serious.”

Graves said he told Campo he had ten minutes to hand over the keys to his car and find a ride home without touching anything in his office and that he was on administrative leave until further notice.

Campo responded by saying that he resigned immediately. He sat down at his desk and typed out a resignation letter and then left. Bring said that he does not know yet what benefits Campo is entitled to – if any – considering how he resigned.

“He’s no longer an employee,” Bring said. “The union who sent the paper is satisfied with what we did. I can’t say that he’s not going to have other litigation, I don’t know.”

Campo is not talking to the media.

The victim’s name has not been made public. Bring said that he had an “emotional” conversation with him on Wednesday.

“This shouldn’t happen anywhere,” Bring continued. “You see this stuff on the news all the time, and you’re thinking, ‘How in the hell can somebody be that stupid?’ It’s out there. It’s done. I don’t even speak of his name right now. I told the officer that we can refer to him as ‘ex-chief,’ or ‘ex-employee.’ I don’t even want to hear his name spoken in this department anymore.”

The victim has retained a lawyer and another officer is acting as police chief until a permanent replacement can be found.

“This was not a ‘prank,’ it was an act of racism toward a Black officer,” Sen. Sherrod Brown (D-OH) tweeted. “Racism and hate are unacceptable in Ohio law enforcement, or anywhere in our state.”

This was not a “prank,” it was an act of racism toward a Black officer.

Racism and hate are unacceptable in Ohio law enforcement, or anywhere in our state.https://t.co/3rY2otiQun