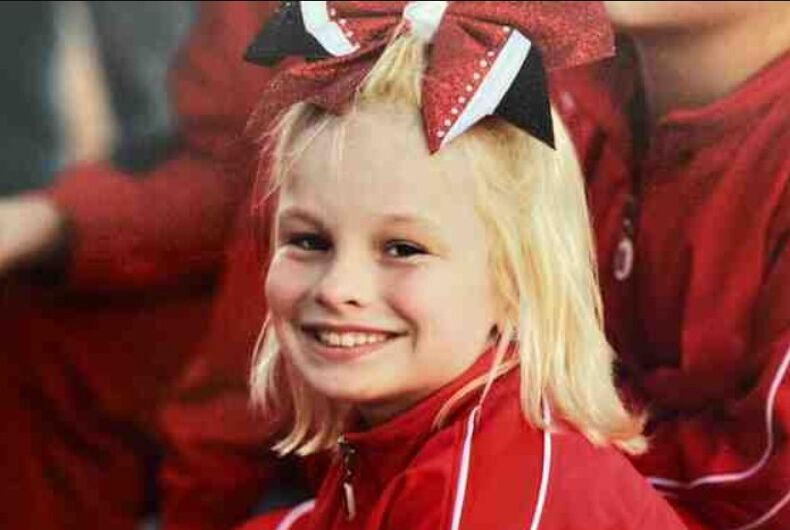 A federal judge ordered the state of West Virginia to allow a transgender girl to participate in school sports as a girl, saying that the state’s trans sports ban is a result of a “fear of the unknown and discomfort with the unfamiliar” in his decision.

“I am excited to know that I will be able to try out for the girls’ cross-country team and follow in the running shoes of my family,” sixth-grader Becky Pepper-Jackson said in a statement.

Pepper-Jackson sued her state last month with help from the ACLU after she tried to join her school’s girls cross-country team but was told that she couldn’t because she’s trans.

The school said that they couldn’t let her join the girls team because of H.B. 3293, which West Virginia passed earlier this year. The law bans trans girls from participating in school sports as their gender, effectively barring them from school sports. Her school’s principal even said it would be “confusing” for her to participate in the boys cross-country team because she’s a girl.

Her lawsuit alleges that H.B. 3293 violates her constitutional right to equal protection under the law as well as Title IX’s ban on discrimination in education.

Judge Joseph R. Goodwin issued a temporary injunction in her case, meaning that she will be allowed to run cross-country as her case works its way through the legal system. While the injunction only applies to her, it’s a good sign for her challenge to the law more generally.

Goodwin said that Pepper-Jackson has a good chance of winning her case and he rejected the state’s argument that H.B. 3293 doesn’t discriminate against trans girls because it treats all people assigned male at birth the same.

Pepper-Jackson “has lived as a girl for years. She has competed on the all-girls cheerleading team at her school. She changed her name to a name more commonly associated with girls. And of the girls at her middle school, B.P.J. is the only girl who will be prevented from participating in school-sponsored athletics. Here, there is an inescapable conclusion that [the law] discriminates on the basis of transgender status.”

Goodwin ruled that not issuing an injunction would result in “irreparable harm.”

“Forcing a girl to compete on the boys’ team when there is a girls’ team available would cause her unnecessary distress and stigma,” he wrote.

“We’ve said all along this cruel legislation would not survive a legal challenge, and we’re encouraged by the court’s decision today,” said Loree Stark of the ACLU of West Virginia. “We hope trans kids throughout West Virginia who felt attacked and wronged by the passage of this legislation are feeling empowered by today’s news.”

The Biden administration sided with Pepper-Jackson in her suit and asked the court in a brief to rule in favor of transgender equality.

One in four LGBTQ young people now identify as non-binary