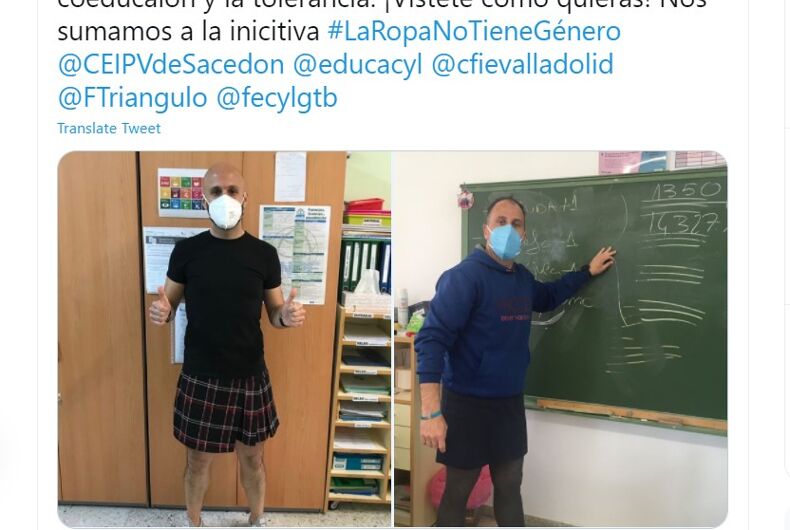 Teachers wore skirts in May in support of a student sent to a psychologist for wearing onePhoto: Screenshot/Twitter

Male teachers wore skirts to work last month in solidarity with a student who was pulled out of school and sent to a psychologist for wearing a skirt.

Fifteen-year-old Mikel Gómez said in a video that went viral this past October that he was taken to a psychologist by school officials when he decided to wear a skirt to his school in Euskadi, Spain. He said he wore the skirt to express solidarity with women’s liberation.

“I knew people would look at me badly,” he said in the video that got viewed over two million times on TikTok. But he didn’t expect to get pulled out of math class and taken to a psychologist who grilled him on whether he is trans and identifies as a woman.

When he said he’s not trans, the psychologist asked him to wear pants instead and Gomez said that his parents later punished him for wearing a skirt.

His viral video sparked a nationwide protest a week later and other boys in Spain recorded videos wearing skirts to class. The protests continued in some towns throughout the year, like in Bueu, where students decided to repeat the protest for gender equality on the fourth of every month since this past November.

“After the first protest we thought we were too small,” organizer Lía Menduíña Otero told Público. She’s a student at IES Johan Carballeira, a high school in Bueu. “It could not be forgotten and we had to continue.”

Manuel Ortega, 37, an elementary school teacher in Valladolid, was one of them. He told El País that he as inspired to wear a skirt to school for the month of May after he saw a male student get made fun of for wearing a manga sweatshirt and the child sadly took it off.

His colleague Borja Velázquez, 36, supported his idea, saying that teachers are role models for students. He wanted to show kids that they don’t have to follow gender roles and “that words hurt.”

“A school that teaches respect, diversity, gender equality, and tolerance. Wear what you want!” he tweeted.

“Twenty years ago I faced discrimination and insults because of my sexual orientation in school, and now I’m a teacher,” tweeted math teacher José Piñas. “Many teachers looked the other way.”

He cited Mikel’s video in a tweet with a picture of him wearing a skirt and a facemask at work.

Meanwhile, the students in Bueu continue their monthly protests.

“They always tell us about the need to learn math, history, language,” Menduíña Otero said, “but not about something as important as equality.”