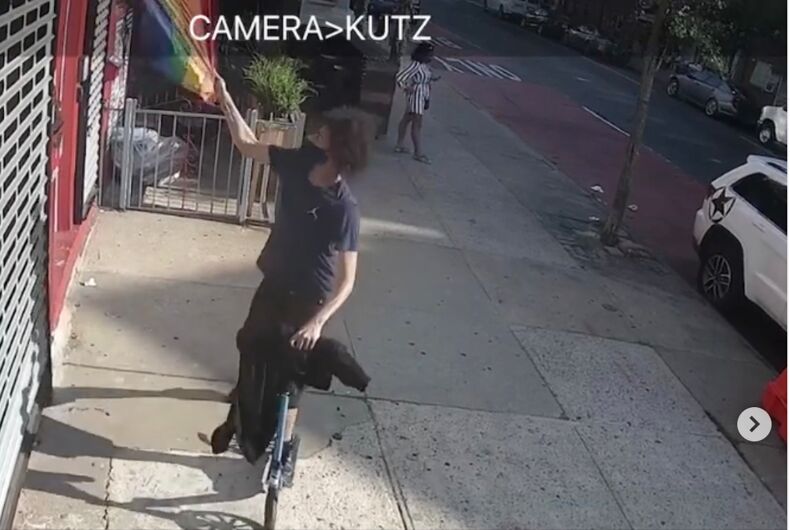 A Black-owned LGBTQ barbershop that has been terrorized throughout Pride month recently had its rainbow flag torn down by a passerby.

June 21 surveillance footage captured the perpetrator riding a scooter passed Brooklyn’s Camera Ready Kutz and then stopping to rip down the flag.

The video, which was posted to Instagram, shows the suspect jumping up and down and trying to pull on the flag several times before succeeding at tearing it down. They also appear to have hurt their arm in the process. Once the flag is down, they throw it on the ground and ride away.

Unfortunately, this was not the first hateful act the barbershop has experienced this Pride month.

Owner Khane Kutzwell told Gay City News that dog feces were been left at the shop more than once, one time in a bag and another time scattered around the property.

“I knew it definitely had to be something that was done on purpose,” Kutzwell said. “One pile of dog doo-doo, you understand that, but when you have multiple piles of dog doo-doo, and it’s going around the shop — something’s going on.”

A dead rat was also left at the shop’s back door.

“A rat didn’t just come out of the sewer and decide to die right there,” Kutzwell said. “It definitely was placed. It was already rotting.”

When the Pride flag was torn down, Kutzwell decided to post about the discriminatory acts on Instagram, declaring she would not be intimidated.

“On the plus side, the flag needed to be washed anyway,” she wrote, “so I’ve washed it, it’s in the dryer right now. I will hang it right back up later today. I’m proud of my Pride Flag… She/He/They put up a good fight… Like Mama always says, make sure you ain’t the only one with a bruise after a fight.”

But she called the incidents “tiring, old and a waste of time.”

“If you’re the person putting poo and dead rats around my shop… just stop. It’s dumb. And to the kid who pulled down the flag… eh, forget it… you’re not even worth my thumb typing.”

The post included a photos of the dog feces and the crumpled Pride flag on the ground.  Kutzwell also included a video of herself proclaiming, “Just love all people. It takes more energy and it takes more headspace to hate. So just love.”

The police have not made an arrest related to any of these acts, but Kutzwell emphasized that her pride has only grown as a result of these incidences.

“The Pride flag is right back up, so the person didn’t do anything but create even more pride within the community… He can rip it down as many times as he wants. I’ll just get another one or wash the one that I have and keep putting it back up.”

“We’re not going anywhere,” she added. “There’s always going to be queer people around.”