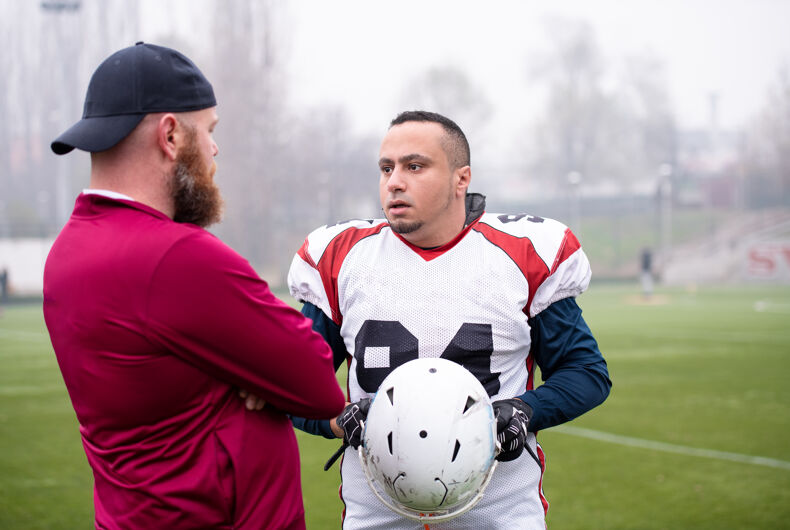 A high school athletics coach and teacher in Texas is facing criticism after he reportedly made clear through his social media activity that he disdains Pride Month and finds gay people against “God’s nature.”

After his support for several anti-LGBTQ tweets came to light, the coach nor his employer have responded to the ongoing controversy.

Related: It matters that (almost) all of baseball is embracing Pride now. It changes the game.

Cody Reeves works as a football coach, track and field coach, and geometry teacher at Seminole High School in Seminole, Texas. Reeves’ social media activity showed up on the timeline of Cyd Zeigler of Outsports beginning on June 1, the first day of Pride month.

Zeigler said that Reeves liked at least 57 straight anti-LGBTQ tweets after he saw an article regarding the Texas Rangers baseball team, and their lack of celebrations for Pride Month. Zeigler was tagged in the tweets, and thus received notification for every anti-LGBTQ reply — and their likes.

“I don’t think people have to respect Pride nights, but this is not just about that,” Zeigler told LGBTQ Nation. “It’s not a surprise to anyone that people have really bad… opinions about LGBTQ people — but I’m not even sure that’s the case here.”

The lone hold out is the Rangers. They've shown no indication they plan to have one, and declined an interview for this story.

Many of the responses were positive or insightful. By liking the 57 tweets in a row that were not, it appeared to Zeigler that Reeves did not support gay people’s existence or celebration, which may also carry over to the classroom or the approximately 750 students in the school that Reeves works in.

From screenshots he shared in an article on Outsports, Reeves supported tweets that called being gay “against the laws of nature,” Pride Month “mental disorder month,” having Pride celebrations at baseball games akin to “having a murderer night or adultery night,” and asking “where’s my heterosexual month?”

“That’s why I reached out,” Zeigler said. “It’s certainly strange to like 57 anti-LGBTQ tweets.”

Zeigler, a former track athlete who co-founded Outsports and the National Gay Flag Football League, reached out to Reeves, hoping to have a discussion about the message that his likes sent to others, and why those opinions may be harmful to the school community he teaches.

Reeves responded by blocking him on Twitter and locking one of his accounts. Zeigler believed he had a second account that is now deleted or couldn’t be found publicly.

Zeigler then reached out to the Texas University Interscholastic League (UIL), which is the body overseeing sports activity at Seminole, hoping they would investigate the matter. Zeigler has not heard back.

Zeigler also reached out to David Williams, the director of human resources in the Seminole Independent School District. Williams told him that Reeves’s tweets were “not the viewpoint of our school district at all,” specifically adding, “what someone puts on Twitter is not how the school district feels about something.”

Williams promised Zeigler that he’d hear back from the superintendent, Kyle Lynch, the next day. Zeigler hasn’t heard anything in the 15 days since, despite emailing and calling repeatedly to follow up.

“Why on Earth is the school district not saying anything about this?” he said. “Their silence speaks volumes as well.”

The article’s author, Dallas Morning News reporter Sam Blum, also spoke on the comments and the lack of response from officials.

Is being gay a "mental disorder"?

This high school football coach liked tweets saying as much, claiming that celebrating #Pride month is akin to celebrating murderers.

Very interesting story from @CydZeigler about a Texas HS football coach liking a slew of homophobic tweets related to my story on the Rangers’ lack of a Pride Night. The school doesn’t appear willing to respond or take any action. https://t.co/cjoIRGOXDU

“From what I’ve seen, there’s been no response to the school,” Zeigler told LGBTQ Nation, “but I know that some people have tried to bring it to the attention of the UIL Texas.”

In the article for Outsports, Zeigler wrote, “My main question has been this: Reeves seems to have an affection for messages painting LGBTQ people as against God’s will and saying they have a mental disorder.

“How will the school district ensure that these perspectives do not seep into his classroom or locker room? It’s an important question to be answered, and it’s why this is of public interest.”

“I’m not trying to get him fired,” he said, “but especially in Texas, educators [need to] ensure the importance that every student that walks through your classroom and locker room feels safe.”

Supporting comparisons between gay people and murderers is not evidence of someone fostering a safe classroom, Zeigler said. He has endured that first hand.

“The very reason I wrote the story is because it raises serious questions about what’s being exposed to students, teens, athletes. In high school, when I was in track, I would hear the worst things said to me,” he recalled. “No one should have to go through that.”

He implores to the school, school district, and athletic officials, “What are you going to do to make sure that attitudes don’t make it into the classroom?”

Zeigler’s search for a dialogue and the request for keeping children safe in school has put him on the receiving end of vitriol. He’s begun receiving hate messages from people claiming to support Reeves’ likes. Still, the messages that Reeves showed support for are being widely criticized.

This all started because of reporting that noted that the Texas Rangers are the only team that has refused to recognized Pride in any form. Now the baseball team’s apparent apathy towards recognizing their LGBTQ community is extending to school sports.

“In this particular situation you’re attacking an entire class of people. You’re attacking them for who they are,” Anthony Nicodemo, an out basketball coach and athletic director, said to Outsports.

Reeves’ webpage on the Seminole ISD website proudly shares that “behavior that is not respectful in any way is inappropriate for the classroom and will not be tolerated” under his guidance, and that students should “refrain from calling names that are derogatory. If someone takes offense to teasing, it is not respectful.”

LGBTQ Nation reached out for comment from Reeves, Seminole High School principal Robert Chappell, and the Seminole ISD superintendent’s office. This story will be updated if or when they respond.

I just got a phone call from someone telling me the high school football coach in Texas is right, that I'm nothing but a "queer" and that I have mental problems. Then, of course, he hung up on me.

This is why these conversations are important. https://t.co/59VK3Tizxn

I tried and tried to talk with the school on this issue. Hopefully SOMEONE chooses to talk about the health and welfare of the students in Seminole in regards to this issue.@UIL_AD@uiltexas@SeminoleISD https://t.co/VSXKZvRYwY

I totally understand, Robert. It's been my goal to talk with the school administrators and the teacher to build dialogue and understanding. I don't want people fired – I want to make people part of the solution. I prefer to build brides over walls.

Crazy story from @CydZeigler. This Texas high school teacher and football coach liked 57 anti-Pride tweets, and neither he nor the school will talk about it https://t.co/yFyQ6tilRO

This is a very important, hugely concerning story from Cyd. We hope @UIL_AD @uiltexas will investigate further. 🏈 https://t.co/oQl33QHdCy

Meet the women from history that you probably thought were straight