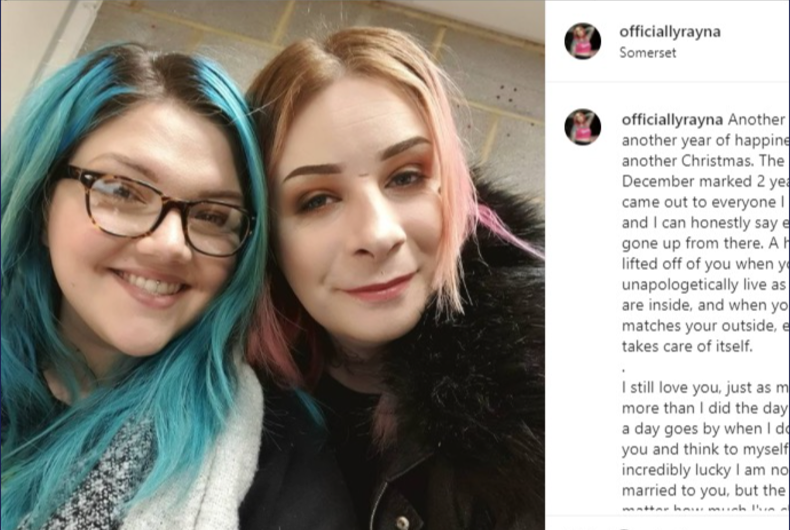 A couple that married in Texas in 2018 has announced that they will be getting remarried after one of the spouses came out as transgender.

Photographer Jae Gray and graphic designer Rayna Harvey married as a heterosexual couple three years ago, before Rayna came out. But weeks into their marriage, Rayna came out to Jae, and she’s been there for Rayna throughout her transition.

Related: J.K. Rowling event gets canceled at book fest because of her anti-trans statements

Jae and Rayna now reside in Somerset, England, where Rayna is from. Their unique love story was first shared with the Daily Mail, then the British tabloid The Mirror, both of which included Rayna’s deadname.

Rayna’s family missed out on the first wedding, which was held in Texas where Jae is from and where her family is. Much of Rayna’s family remains in England.

“There’s a bit of a disconnect when we think back to our first wedding as I feel ‘well Ray wasn’t there?’ and I want her in my wedding,” Jae said. “What I want more than anything is for her family to see her walk down the aisle and for her to have her day — I got to have mine with all my bells and whistles, so now it’s her turn.”

They are planning to hold their re-marriage in the Quantock Hills around September 2022.

Jae and Rayna met online in 2007 via Myspace, before reconnecting via MSN. Rayna first came to see Jae in person in Dallas around 2010.

After losing connection for some time, the couple rekindled and when Jae flew to the United Kingdom for the first time, Rayna proposed to her right in the Bristol Airport before she returned to Texas. Jae said yes, and they held their first ceremony in front of 30 guests in March 2018.

When they started their honeymoon to the Centre Parcs village estate in Longleat Forest about two months later, Rayna revealed on their trip that she had realized she was a girl since she was at least 11 years old.

Jae, who is now 30 years old, is also a hairdresser and make-up artist. Not only was she supportive, she helped Rayna put on her first dress and did her makeup mid-honeymoon.

“It was liberating. Something I’d been storing away for so long and when it actually happened it was more of a relief – the overpowering feeling was ‘thank God for that,'” Rayna reflected. “It must have been a bit of a shock for her in the first instance but she’s turned everything on its head to make me feel comfortable.”

“Once we opened up communication and she realized it’s safe with me [and that] I’m not going to judge her or get angry and just wanted to understand so I could help, it all started clicking and making sense,” Jae said.

After some time, Rayna became more comfortable in her gender identity and began donning a feminine appearance when she went outside. “The very first time we went out with her presenting as a female and someone addressed us as ‘ladies’ in a restaurant her face lit up – I knew at that exact moment that she was trans,'” Jae said.

Rayna came out publicly for the first time in December 2018. She received “absolutely incredible support” from her friends and her family, and notes that her 93-year-old grandmother has sent her celebration cards recognizing her transition.

“I’m like the same person but in a different body really,” Rayna said. “There’s been periods of self-loathing and trying to figure out what’s going on in my head,” she added, but “Jae’s helped me put the pieces together.”

“I absolutely would not have gotten to where I am today without Jae,” Rayna said. “She’s been instrumental in my transition.”