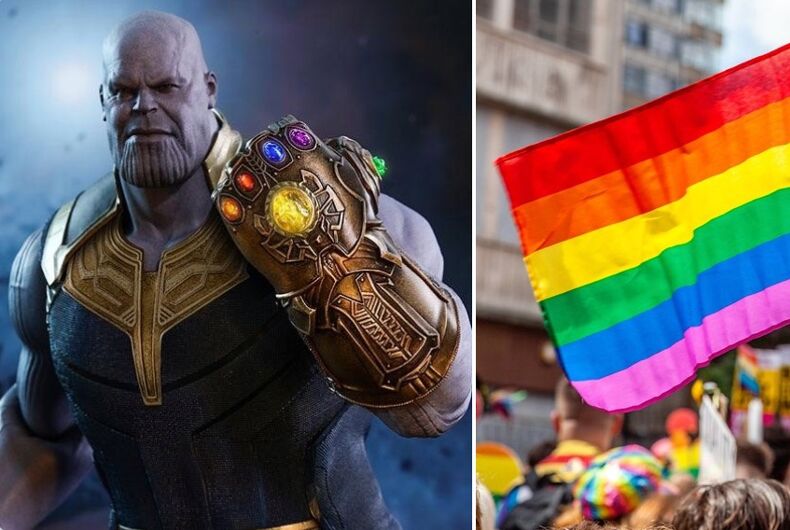 He's muscular, sports Pride-colored jewelry, and he loves to snap his fingers...Photo: Composite

Thanos, the notorious villain of the Avengers in the Marvel Cinematic Universe, is no stranger to memes. The antagonist of the blockbuster film Avengers: Endgame has continued living online as the face of social media’s favorite jokes.

But when a user on Twitter jokingly called himself the “gay Thanos,” others began talking about it, actually considering how much the Josh Brolin-portrayed character being gay or queer would make sense.

Related: Tom Holland would be okay playing a gay Spider-Man, but don’t hold your breath

It started when Scott Smajor, an out video gamer who is known for playing Minecraft, tweeted about a competition he was taking part in. His participation on all the different teams in the competition made him “basically gay Thanos.”

The topic began trending on May 14 and users were fascinated with considering the idea.

Also, me being in Aqua makes me the only MCC player to have been on every team. I have collected all the team colours. Im basically gay Thanos

Of all replies….. you pick the snappiest one

The power I hold making both of these trend LMAOOOO pic.twitter.com/Yh5xDPSGoq

Throughout his arc in the Avengers series of movies, Thanos strives to collect six colored gems to put on his infinity gauntlet, which grants him the ultimate power to obliterate half of all life with a snap of his fingers.

Reasoning in favor of the cult theory include the fact that the gems’ colors also correspond with the Pride flag’s colors, and that his infinity gauntlet needs to be bejeweled to grant him power in the first place.

Also, “he was a lil too experienced in choking someone,” a user pointed out while including a screencap of Thanos holding Loki up by his neck.

Some other posts took, well, liberties with their imagining of the concept.

DO NOT GO DOWN THE GAY THANOS TREND YOU WILL SEE HUGE THANOS DICK UNCENSORED WORST MISTAKE OF MY LIFE https://t.co/1LmbJaYfyI

Idk why Gay Thanos is trending but I support it 🤟 ❤🧡💛💚💙💜 pic.twitter.com/kJWDapbxhc

Once it became the buzz of Twitter, People across the internet were bemused with the idea.

The main question left is if we’re imagining gay and queer people in the MCU, what other main characters are actually gay too?

So proud of him! Gay Thanos is so brave!! pic.twitter.com/wYFu2NFazP

Gay Thanos is trending so i’m doing my job with the only gay thanos meme i have pic.twitter.com/cjVfqLwBi7

Gay thanos trending? Explains why he was a lil too experienced in choking someone in this scene 😈🤭 pic.twitter.com/xV2n1uwCJ3

"all the gays are going to hell"