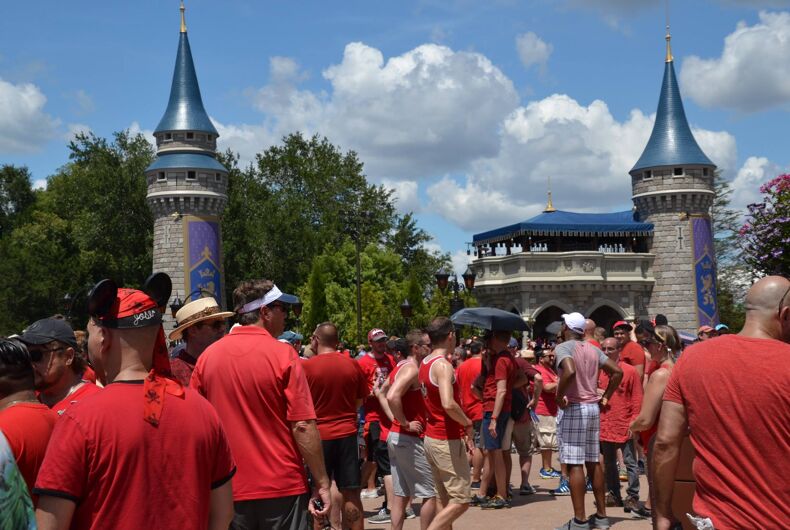 Visitors to the Magic Kingdom's Gay Day wear red as part of the festivitiesPhoto: Facebook/Susan Schaller

After being canceled last year due to COVID-19, the famed “Gay Days Anaheim” will finally return to Disneyland and Disney California Adventure.

From September 17th-19th, thousands of people will don the signature Gay Days red shirt and meet up for trivia, scavenger hunts, ride takeovers, parties, photoshoots, and so much more.

In 2020, the group behind Gay Days Anaheim held a Mini Gay Days, which was the last event held at the parks before lockdown.

“And now,” the group’s website declares, “we are so excited to announce that Gay Days Anaheim will be the VERY FIRST GROUP to return to Disneyland!!! On September 17-19, we will rechristen the parks with red!”

Gay Days Anaheim has been held for over twenty years, though this year marks the first time it will take place in September instead of October. The change was in the works before the pandemic and was requested by Disney as a way for Gay Days to avoid overlapping with Halloween crowds.

The tradition of red shirts stems from the first-ever gay day in 1991 at the Magic Kingdom in Orlando, Florida. A small group of gay men communicated through online bulletin boards and agreed to meet there socially. They wore red shirts so they could easily pick each other out of the crowd.

Unlike at the Magic Kingdom, Gay Days Anaheim is not an officially sanctioned Disney event. Nevertheless, Inside the Magic noted that the park has indeed embraced it and will sell Pride merchandise throughout the weekend.

Those planning to attend this year’s events in California can buy the official 2021 red shirt on the Gay Days Anaheim website. There are also tanks and pins available.

The 2021 schedule has not yet been publicized, but the website features the 2019 schedule to give guests an idea of what the weekend will look like.

The old schedule proclaims, “Watch the Happiest Place on Earth become the gayest!”

Is it time for the queer community to cancel Kyrsten Sinema?