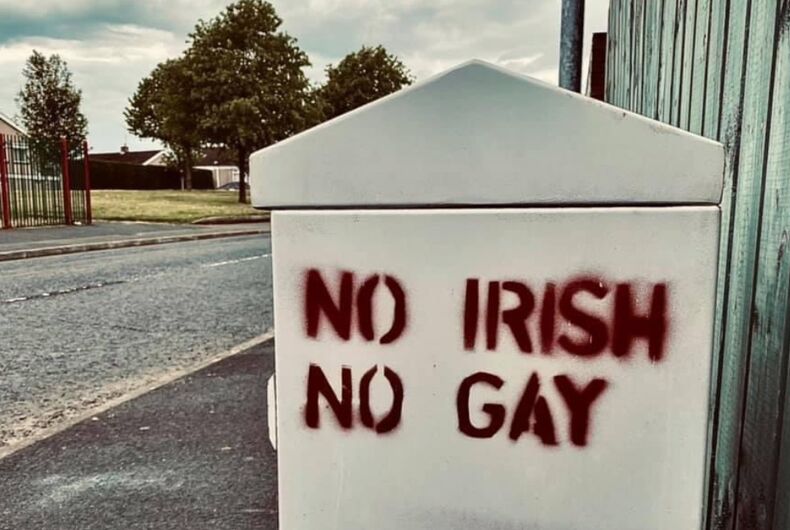 The latest graffiti left in Lurgan in Northern IrelandPhoto: Screenshot

An anonymous vandal is stirring up bad feelings in Northern Ireland with graffiti that targets the LGBTQ community and Irish people.

The person responsible has left numerous “reprehensible” tags around Lurgan in County Armagh. One faced the local hospital while another was left on an electrical box.

“Spray-can warriors will not hold back the progression of LGBT+ rights,” Councilor Ciaran Toman tweeted along with a photo of the graffiti.

The latest graffiti reads, “No Irish. No Gay.”

After anti-gay slurs were spray-painted on an abandoned house, Alliance Lurgan Councilor Peter Lavery denounced the cowardly resident. The language painted was so “crude” and “reprehensible” the local news refused to print or show an unblurred photo of the damage.

“Lurgan is an inclusive, welcoming town that is looking to the future,” he said. “Those spray-painting these homophobic statements do not represent the vast majority of people here, and I condemn them and their actions entirely.”

“All of us must unite and face down homophobia and those who promote it. I have asked for the graffiti to be removed and I urge anyone with information on this incident to contact police with it immediately.”

“These views are not representative of the majority of people of Lurgan nor in [Northern Ireland] and they will not be tolerated,” Toman added.

This racist & homophobic action is a direct consequence of the failure of political leaders.

These views are not representative of the majority people of Lurgan nor in NI & they will not be tolerated.

Spray-can warriors will not hold back the progression of LGBT+ rights pic.twitter.com/OXCGFq3is7