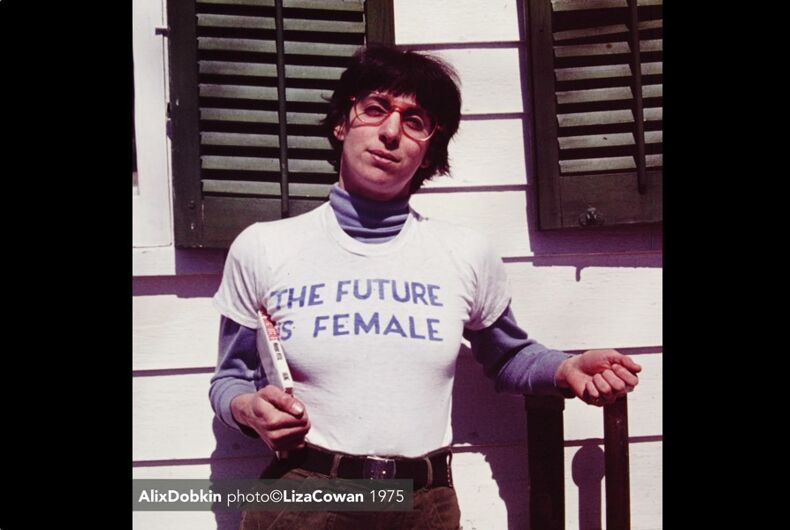 “There are only two responses to freedom. One is trying to control everything. The other is to be creative and take risks.” –Alix Dobkin, 1994

Alix Dobkin, singer, songwriter, and the face of the iconic “The Future is Female” t-shirt photo, died peacefully in her sleep, surrounded by family, on May 19th from a brain aneurysm and stroke. She was 80 years old.

Born in 1940 into a loving Jewish family in Philadelphia, Alix spent her early years listening to the music of Paul Robeson (who once visited her family), Pete and Peggy Seeger, Leadbelly, The Red Army Chorus, and her much-loved songs from Broadway musical theater. Alix’s parents were members of the American Communist Party until they quit while she was a teen, but from them, she gained a passion for civil rights and social justice.

Alix spent her college years studying painting at The Tyler School of Fine Arts / Temple University, but her love for music was paramount. After graduation, she picked up her guitar and headed for the folk music clubs of Philadelphia and New York. As “Miss Alix Dobkin” she performed with a very young Bill Cosby, and became Bob Dylan’s favorite “girl singer.”

At the New York City folk club The Gaslight Cafe, Alix met her husband, Sam Hood, who ran the club with his father. They soon left New York to start the Florida branch of the club; later, in 1970, they opened The Elephant, a folk venue in Woodstock, New York. That summer Alix and Sam’s daughter, Adrian Hood, was born. Soon they left for New York City, where Sam produced the shows at Max’s Kansas City, while Alix stayed home to take care of the baby.

Later that year Alix’s life pivoted when she became aware of the nascent Women’s Liberation Movement. As she lay in bed one night, listening to a radio interview with Germaine Greer on WBAI-FM, she realized that this would be the cause of her lifetime. She joined a Consciousness Raising Group, separated from her husband, and struck out on her own. She picked up the guitar once more and wrote a letter to the producer who had done the interview which had so inspired her, asking if she could perform on her program. The night they did the live on-air broadcast, Alix and the producer, Liza Cowan, fell in love, and soon moved in together, along with 11-month-old baby Adrian. Alix was now a capital L Lesbian.

Alix’s genius was in realizing that she could perform her music for audiences of women, and she became the founder of the genre now known as Women’s Music. She soon met classical musician Kay Gardner, and together they started the group Lavender Jane. No record label was interested in investing in someone who wanted to perform only for women, so Alix formed her own production company, Women’s Wax Works, and produced the first recorded album of Lesbian music, Lavender Jane Loves Women, in 1973, with an all-woman team, from performers to the sound engineer, and even record pressing. The cover was an illustration Alix drew, which a group of friends spent several evenings gluing to the cardboard sleeves.

Inspired by her decision to write for women, Alix wrote many dozens of songs, now known for their rousing and often humorous lyrics and engaging rhyme schemes. Calling on her roots in folk music, Broadway musicals, and the vocal traditions of Balkan songs,  Alix’s compositions were based on storytelling, recalling moments not just in her own life, but accounts from stories told to her on her travels. One of her most famous, and most popular, is “Lesbian Code” in which she recites the code words that Lesbians use to name their own. She collected the many code words during her world travels, often in the middle of a concert, to the amusement of her audiences,  who would call out their favorite words while Alix took notes in a small spiral notebook. She said she was doing Lesbian Anthropology.

Another famous song is her reworking of A– You’re Adorable (The Alphabet Song)  to A –You’re An Amazon. When a fan told Alix at a concert that her uncle had written the original, and that he was gay, Alix was thrilled. She closed every show with Amazon ABC, and always told that story.

As Alix’s music evolved in the 1970s and 1980s, so did the Women’s Music genre, with feminist coffee houses, clubs, music distribution companies, women’s bookstores, publishers, recording companies, and festivals created throughout the United States. Alix appeared at all of them, and became beloved as “The Head Lesbian.” She recorded five more albums over the next several years, and regularly toured the US, Canada, Australia, England, Wales, Ireland, New Zealand, Italy, Denmark, and Germany, always performing to large audiences of women. She was known not just for her songs, but as a humorous raconteuse (which she pronounced, tongue in cheek, as “racontoozie.”) Although folk music was her default genre, Alix was always eager to explore other musical forms, from Yiddish tunes to Pop, to Disco to Rap.

As the women’s movement changed, and as Alix aged, she continued to perform but devoted much of her time as a steering committee member and co-director of Old Lesbians Organizing For Change (OLOC), an advocacy group. In 2009 Alyson Books published her memoir, My Red Blood, recounting her early years growing up as a Red Diaper Baby in a communist family, and the early days of her folk music career.

Alix spent the last half of her life living in Woodstock, New York, raising her daughter along with former husband Sam, leaving only to tour. In her later years,  she spent her days working for OLOC, performing rarely, and helping care for her three beloved grandchildren.

While living in Woodstock Alix was well known as Grandma Alix. Her local Woodstock community cherished Grandma Alix and will miss seeing her walking through town listening to her walkman, singing, playing guitar, and slinging pizza as the favorite Lunch Grandma at the Woodstock Day School. Some fortunate few were even lucky enough to see her perform Boogie Oogie Oogie at a recent school event.

She leaves behind her daughter, Adrian Hood, son-in-law Chris Lofaro,  grandchildren Lucca, Marly, and Sammy, as well as her brother Carl Dobkin, sister-in-law Pat Dobkin, her sister Julie Dobkin, two nieces, as well as her former partners, and a host of friends and fans.

Liza Cowan is an artist, designer, cultural generalist, and small retailer.  From 1975-1979, she published and edited (along with Penny House) DYKE: A Quarterly.

Let’s talk about ourselves for a bit