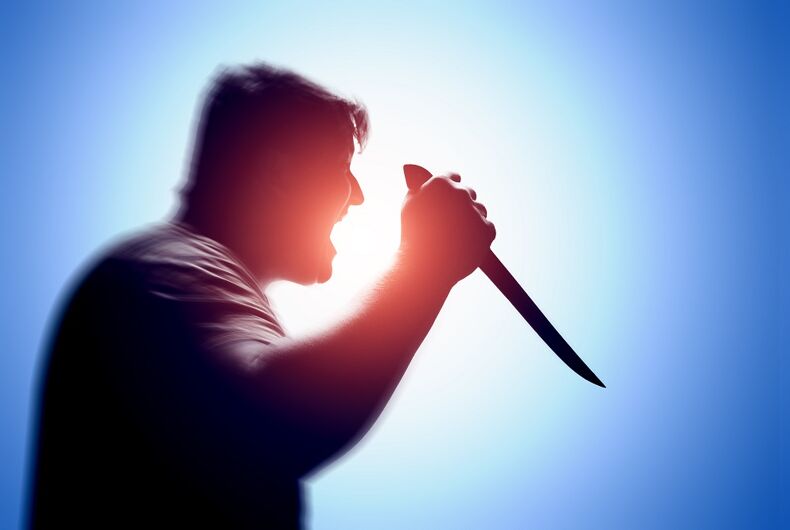 Prosecutors believe that a father stabbed both of his sons in a horrific fight that occurred after the sons called him out on his anti-LGBTQ language when they were home for Christmas last year.

One of the sons had to spend three nights in the hospital because the knife almost perforated his bowel and another had a stab wound near his heart, but the father got sentenced to a year and nine months in prison after he pled guilty to two charges of unlawful wounding.

Related: A father slit his son’s throat for being gay in an attempt to kill him

According to Yorkshire Live, prosecutors told the Sheffield Crown Court in the U.K. that Robert Mitchell, 48, got drunk on December 26, 2020, and he and his partner made negative comments about LGBTQ people, saying he did not understand these “types of people.”

One of the sons said that he had gay and trans friends, and Mitchell was allegedly offended. The other son told his father and stepmother to stop being “c***s,” an insult that is more common in the U.K. than in the U.S.

The father stood up and attacked one of his sons. The two “then began to fight resulting in a grapple,” according to prosecutor Eddison Flint.

Flint said that the father was “a strong man who has previously trained in jujitsu” and that he pinned his son to the ground and hurt his back.

Mitchell then let him go, but he got up and went to the kitchen to get a knife. He came back and stabbed one of his sons in the chest and torso.

The other son was restraining the stepmother. She said that she couldn’t breathe, and Mitchell then turned to stab the other son, getting him twice in the torso and twice in the armpit.

After the fight, the brothers ran out of the house and knocked on their neighbors’ door for help. One of the sons spent three days in the hospital.

The other son said that his father and stepmother tried to blame him and his brother for the attack.