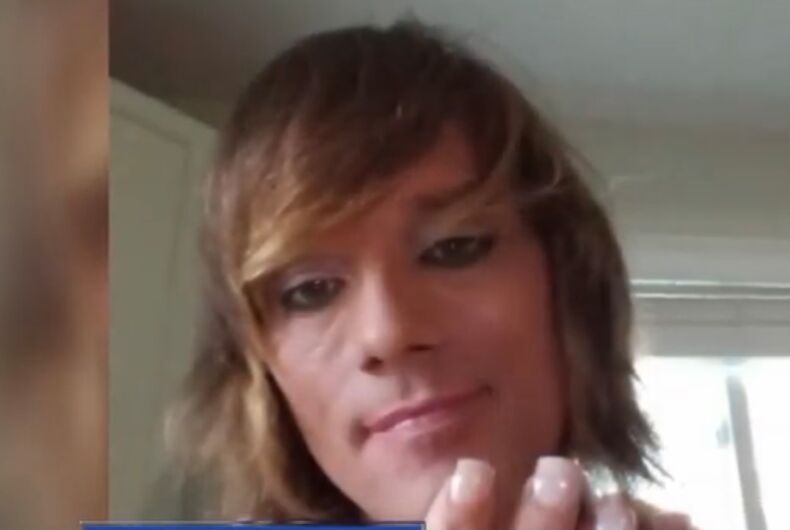 Jenna Franks of Jacksonville, North Carolina has become what is already the 10th known homicide or violent death of a transgender or gender non-conforming person in 2021.

Information about her death is just now coming out because she was misgendered in initial reports. Worse, advocates allege that both police and local news reports are continuing to misidentify and misgender her.

Related: Mississippi is the first state to pass a law attacking transgender youth

Franks was found on February 24, 2021 by city workers, dug into a ditch in a wooded area. “Information obtained over the few days have investigators treating the case as a homicide,” Jacksonville Police Department (JPD) Capt. Mike Capps said in a statement.

Franks, 34, was an active part of the LGBTQ community in her area, namely the Onslow County LGBTQ+ Community Center. She was described as a “beautiful soul” and a “breath of fresh air” by Center director Dennis Biancuzzo.

“But the first thing reported about her by local media was the one thing I never wanted to hear: the deadname she was assigned at birth,” Biancuzzo said.

Local reports from ABC affiliate WCTI-12, CBS affiliate WNCT-TV, NBC affiliate WITN, and the Jacksonville Daily News identified her by her gender assigned at birth and her dead name. Media advocacy group GLAAD became aware, and soon several publications were being contacted, asking them to revise their stories. As of now, most stories still deliberately misidentify her.

WCTI-12, who was among those first to report on Franks’ discovery on February 26, continues to identify her by her former name despite the fact that they also reported that a local trans activist “said the victim is known by the name Jenna Franks” and that her murder was believed to be “the fifth transgender person who has been found dead in North Carolina since January.”

WITN has updated their story with Franks’ name and correct gender, but their original story remains right below it where they misgendered her.

WNCT-TV and the Jacksonville Daily News have since reported that she is a trans woman and refer to her as her name. The Daily News did not correct their previous reporting that used Franks’ deadname.

“It’s unfortunate that North Carolina’s local media has failed transgender North Carolinians at a time when accuracy and representation are needed the most,” GLAAD communications coordinator and regional media lead for the South Region Serena Sonoma said in a statement.

The Human Rights Campaign also condemned the misgendering, noting that this is “an injustice compounding this tragedy.”

“Jenna was misgendered in initial media and police reports. Anti-transgender stigma is exacerbated by callous or disrespectful treatment by some in the media, law enforcement and elected offices,” they note.

Local police have refused to refer to Franks with her actual name, insisting that using her deadname will help them catch her killer, despite the obvious inconsistency between telling the public to look for a man’s killer versus someone who killed a woman. Most of her friends and associates wouldn’t know her by her former name. The “motivation” behind insulting a murdered transgender person has been frequently identified as bad policing.

The media has since used the police department’s “reason” as an excuse for their poor reporting. Every major journalism stylebook instructs editors and reporters not to use a transgender person’s deadname.

Biancuzzo defended the police department, however, saying that “this is an experience that JPD has never before been through, as far as having to deal with the death of a transgender person.”

“Both JPD and the center are learning from one another and will continue to build a professional working relationship to continue to provide excellent law enforcement protection,” he said to the Daily News.

Biancuzzo has also started a fundraiser for the “Jenna Franks Interim Housing Fund,” which will “offer housing and job training for LGBTQ people experiencing homelessness,” according to the Human Rights Campaign. Franks’ other sister, Amber Franks, said that Jenna “would be so happy to know that she did something to help those who needed help like she did.”

Anyone with information is asked to contact detectives of the Jacksonville Police Department or the local Crime Stoppers, which offers rewards up to a total of $2,500.

A celebration of life for Jenna Franks is planned for April.

Jenna Franks’ death is at least the 10th violent death of a transgender or non-binary person in 2021. Barely three months into the year, we’re already seeing an alarming rise in fatal violence against our community.

I have been contacted by Detectives Stitz this morning. Jenna Franks death has been officially ruled as a homicide. I…