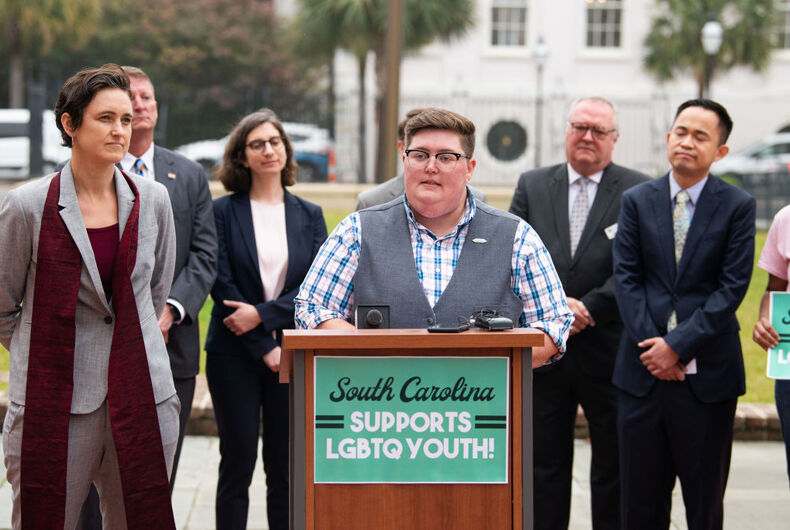 Over the past few weeks, my heart has been broken a hundred times over by reading about and listening to hearings on bills that attack transgender youth across our country.

The bills are egregious. Some proposals prohibit transgender minors from receiving essential medical care, even criminalizing medical professionals who provide transition-related care to minors. Other states are considering bills that would restrict transgender students from participating in school sports. Mississippi’s governor just signed one into law.

Related: Out senator Kyrsten Sinema’s favorability ratings are tanking & everyone knows why

One of the greatest gifts my work has given me is the opportunities I’ve had to build relationships with incredible trans people across the South. We are some of the most vulnerable people in our country. We face elevated rates of depression, anxiety, and attempted suicide at nearly 10 times the national average.

But let me be clear: These scary statistics are not because being trans is inherently a dark thing –  they are a direct result of legislation like the wildfire of bills this year targeting trans people for being who they are.

Young trans people have been relentlessly bullied – not only by other students, but also administrators, and teachers. And now, they’re being bullied by lawmakers and random people who spout transphobia through the static mess of Zoom hearings.

And, gosh, has the public discussion about the bills been stomach-churning. Lawmakers who know nothing about transgender young people use inflammatory language that ignores science. Anti-trans activists are invited to comment on the bodies and experiences of trans youth. And for transgender people, the message is coming through loud and clear: There are forces out there working to deny your very existence.

So let me take this moment to try to drown out that discouraging cacophony. Let me take a moment to speak directly to transgender young people who feel rejected and alone after a year that has already been the most socially isolating period they have ever lived through because of the pandemic.

Trans youth – I know you’re under attack. I know you’re already dealing with so much in your everyday life. I know it’s hard and invalidating to hear not just your life but also your body and whole existence be talked about and debated like this by people who do not understand.

I’m here to tell you today that there is absolutely nothing wrong with you. You should not have to be advocating for your basic human dignity, but you inspire me so deeply the way you raise your voices to defeat these bills.

I admire you. Instead of feeling demoralized, you have spoken out and pushed back.

I was part of holding an aftercare space for incredible young people who were fighting one of these anti-trans student athlete bills in South Carolina this month. One of the youth was strong enough to be real and vulnerable in that space. They looked at me and my co-facilitators and said through tears “You just don’t know how much it means to see real trans adults who are alive and OK.”

That moment has stuck with me. It hit me right in my heart, dead in my gut.

The stories these young people are being inundated with are far too often about how their lives and dignity are under attack legislatively. How their peers are having issues being allowed to access public accommodations. How Black trans women are being physically attacked and murdered.

It isn’t nearly often enough they get to hear someone simply say to them, “Hey, I get it. I was a trans kid in the South, too. I know it’s hard. But you know what? You can make it! You have everything you need already. It’s already inside you. You can do and be anything your heart desires, and I am delighted by your existence.”

No one needs to be saved from you. You are not dangerous. Your existence is real and valid, and you deserve every single opportunity your non-trans peers have, be it the right to access healthcare, to play sports, or to pursue your dreams.

No matter what legislation is introduced – you won’t ever have to face it alone. You have a huge group of people who love you, support you, see you, and hear you, and I want you to know we have your back. Always.

Ivy Hill is the Executive Director of Gender Benders and the Community Health Program Director of the Campaign for Southern Equality.