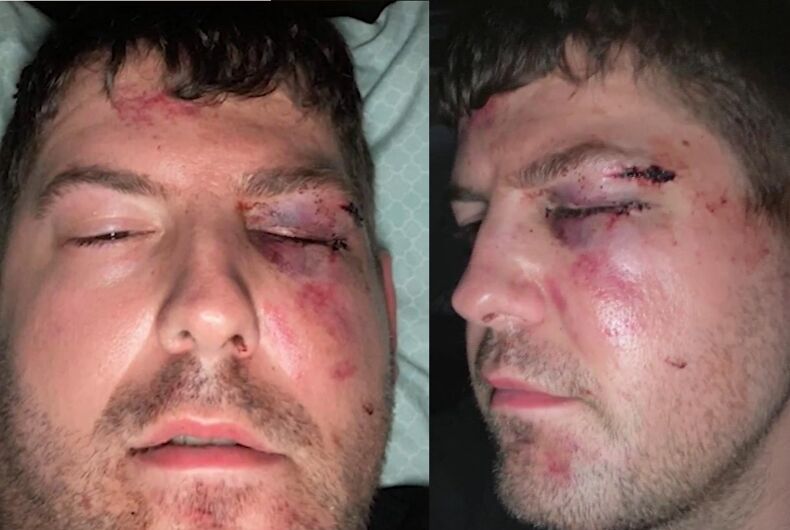 One of the victims of the alleged hate crimePhoto: Shutterstock

A gay couple who was brutally beaten at a Missouri casino because one of the men had his arm around the other, and now they could suffer permanent injuries – including lost teeth.

“I think about it a lot, especially with my boyfriend. He took a real beating for no reason,” said one of the victims who talked to Fox 2 Now. He did not want to be named in the media. “It felt pretty helpless. It was pretty scary.”

He and his boyfriend went to the Ameristar Casino in St. Charles this past weekend and the boyfriend had too much to drink, so they decided to leave. He was walking to their car with his arm around his boyfriend at around 1:30 a.m.

That’s when they crossed another group of people, and one of the men in that group pretended like he was going to punch the gay couple.

“They saw me with my arms wrapped around him and that’s why they did that [fake hitting] motion and said [anti-gay slur],” he said. “Obviously, when they said that, everything after that was out of hate, so it’s clearly a hate crime.”

He confronted the man who said the slur and that’s when at least two people from the group started to beat him and his boyfriend.

The victim who talked to the news will need surgery for a fractured nose and eye socket. His boyfriend was knocked unconscious in the beating and lost several teeth.

But even though the victim said that multiple witnesses heard the alleged assailants call them the anti-gay slurs – and there’s surveillance camera footage of the beating – police are reluctant to call it a hate crime, saying there’s not enough evidence.

“There’s a dispute as to what type of language was used back and forth,” said a St. Charles Police Department spokesperson. “At this time, we don’t have anything to support that the two people got beaten up or targeted because of their sexual orientation.”

Missouri has a hate crimes law that includes sexual orientation. If hate crimes charges are applied, the alleged assailants could face an additional three years in prison.

The victim says that he and his boyfriend are now afraid to go out.

“How do we go anywhere and feel safe if we get attacked there, especially someplace like Ameristar, who should have top-notch security. If it happens there, it could happen anywhere,” he said.

In a statement, Ameristar said that they have a “zero tolerance policy” for violence and intolerance but won’t comment on the alleged attack.

“The safety and security of our guests and team members are among our highest priorities, and we have a robust security and surveillance presence throughout our property,” the statement says, adding that they “are working closely with law enforcement in their investigation.”