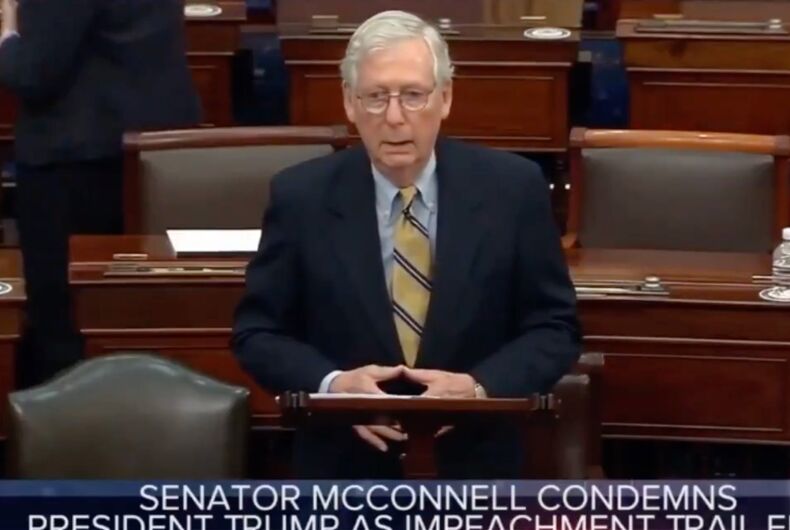 End Times preacher and conspiracy theorist Rick Wiles is back with a new claim – and it is finding eager believers in QAnon cultists. The target? Senate Minority Leader Mitch McConnell (R-KY).

Wiles has a sordid history of antisemitism and misogyny; obviously, he’s no friend of the LGBTQ community either. But this time, the cause of his consternation is… the Masons.

While McConnell voted to acquit former President Donald Trump of sedition, he cowardly gnashed his teeth after the vote to proclaim that Trump was guilty, but since he was out of office, he couldn’t be convicted. Of course, the Senate had already decided that he could. And McConnell refused to bring it to a vote before Trump left office.

McConnell’s crocodile tears were vilified by both Democrats and the MAGA crowd, but Wiles is tying it neatly into the “Deep State” QAnon conspiracy theory realm.

“Mitch,” Wiles asks as the politician speaks and mildly gestures, “are you trying to tell us something?”

“Right there. Look at that,” he tells his co-host.

“I’ll let our audience decide,” the other host replies.

“Yes, it is.” the co-host replies. “Is what’s he’s reading right now, is that the Masonic script that’s been laid out for him to read at this point? Who knows?”

“I don’t know if Mitch McConnell is a Mason,” Wiles adds. “He has some Masonic tendencies right now.”

The QAnon conspiracy theory echoes the Masonic conspiracy theories of the 18th century. Believers insisted that the secret society controlled the government, were in league with the devil, and controlled academics, entertainment, and finances.

QAnon believers insist there is an international Satanic pedophile ring involving former Secretary of State Hillary Clinton and actor Tom Hanks that Trump was secretly working to take down. Many of the insurrectionists who attacked the Capitol during the MAGA riot believe in the outlandish conspiracy.

Wiles made national headlines earlier in 2020 when his website got White House press credentials. He has blamed transgender children, gay activists, and Jews for the spread of the coronavirus in the U.S.

Wiles is the founder of the far-right conspiracy website TruNews, which hosts his video broadcasts. The site is known for extreme anti-Semitism, homophobia, and disregard for facts. Trump loves it.

Like the secret handshake of the water buffalo lodge members pic.twitter.com/LnsJ8zK2PZ

Was Ted Cruz busted sneaking off for a Cancun vacation as Texas freezes?

What does the impeachment acquittal & anti-trans legislation have in common?