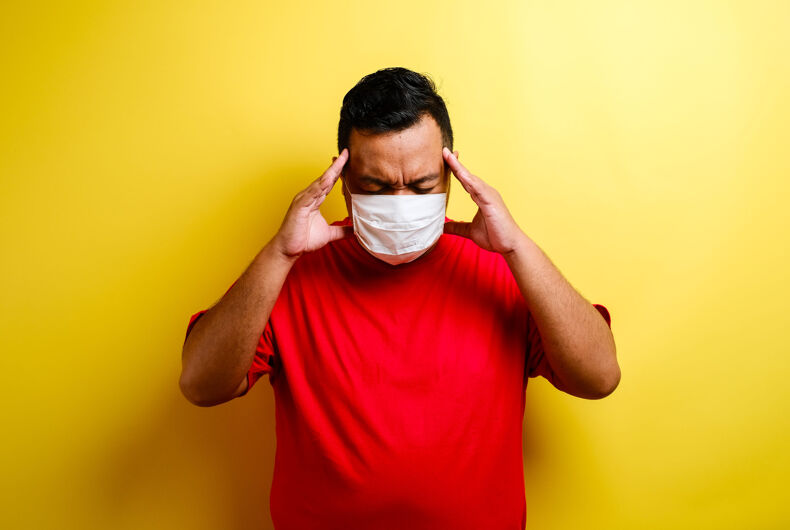 Being non-heterosexual, non-cisgender, and/or non-white in America already comes with enough disadvantages. The coronavirus pandemic seems to continues to make those disadvantages worse as we enter its second year.

A study by UCLA’s Williams Institute released on February 18 found that LGBTQ people of color are twice have been twice as likely to contract COVID-19 than white, cisgender and heterosexual people.

Related: Medical school suspends study that would have tortured transgender people for science

“The impact of the pandemic on LGBT communities cannot be fully understood without considering race and ethnicity as well as sexual orientation and gender identity,” the study’s authors determined.

Additionally, while one-fifth of white people — both straight & cisgender, and LGBTQ in this instance — personally knew someone that died, one-third of LGBTQ people of color surveyed did as well.

That led to an unsurprising discrepancy in difficulties making ends meet for the people surveyed. Twenty-nine percent of the LGBTQ people of color polled were having issues affording household items, while 14 percent of cisgender & heterosexual white people reported similarly. Twenty-six percent of LGBTQ people of color had issues with rent or mortgage payments, while nine percent of cisgender & heterosexual white people did.

In terms of trust in entities tasked with responding to the pandemic, slightly more non-LGBTQ people trusted the COVID-19 response from governance and pharmaceutical companies as opposed to LGBTQ people.

Thirty-one percent of LGBTQ people reported that they trusted the government response to COVID-19 while 38 percent of non-LGBTQ people did. Note that the respondents were polled between August 21 and December 21, prior to Joe Biden’s inauguration, and prior to the 2020 election for some respondents.

“With a change to the Biden administration, restoring trust in institutions that are critical to successfully vaccinating LGBT communities, and in particular LGBT communities of color, will be critical,” the study’s authors wrote.

Trust in the CDC was high among both groups, with LGBTQ people trusting the Centers for Disease Control and Prevention (CDC)’s information to be accurate at 75.6% compared to 69.5% of non-LGBTQ people.

As for pharmaceutical companies, 28.2% of LGBTQ people feel that some of the companies have their best interest in mind, while 40.9% of non-LGBTQ people felt that way.

The CDC determined that so far, people of color are up to three times as likely to die from the coronavirus and up to over three times as likely to be hospitalized than their white counterparts. They also found this month that LGBTQ people were more likely than cisgender and heterosexual people to suffer severe coronavirus complications due to increased underlying health conditions.

This recent study confirms that the effects are just as drastic on people of multiple marginalized identities.

Out Olympian Matthew Mitcham tried to “train” himself to be straight