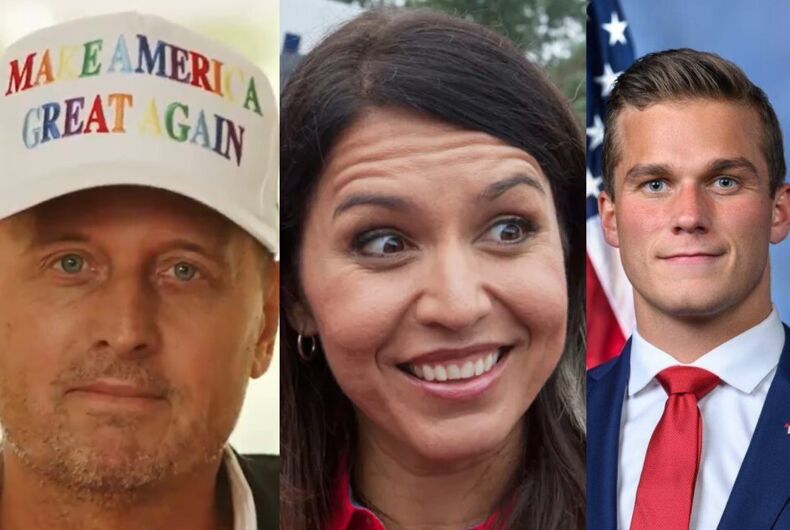 There are a lot of, shall we say, unsavory characters we’ve had to deal with in the last few years, starting with now-former President Trump. Luckily many of them are already irrelevant and forgotten, but several are still trying to stay relevant.

There are also new faces joining the political scene who we, unfortunately, will likely have to deal with for a long time. Below are four people (some members of our own community and some who are not) who have been particularly odious to LGBTQ people.

Grenell was the U.S. Ambassador to Germany under President Trump and was temporarily appointed to serve as Acting Director of National Intelligence (DNI). Grenell behaved more as a political hack than a national security official, using the position to do Trump’s bidding.

When Pete Buttigieg was recently confirmed by the Senate as Secretary of Transportation, Grenell went on a social media tirade accusing the media of ignoring him. He said that he was the first openly gay cabinet member, even though he was never nominated or confirmed by the Senate and the DNI isn’t a Cabinet secretary. At the President’s discretion, they hold a “Cabinet-level” position similar to the White House Chief of Staff.

You’ll find him on Twitter claiming to be a champion for LGBTQ rights while adamantly defending the most anti-LGBTQ administration in history. Grenell can make his delusional claims as much as he wants, but hopefully, the rest of us won’t have to hear his name again.

The now ex-Congresswoman started her political career fighting against marriage equality and left Congress after launching a dismally unsuccessful Democratic presidential primary campaign. During her embarrassing run, she made wild accusations about former Secretary of State Hillary Clinton and regurgitated right-wing attacks against now-Vice President Kamala Harris. Both got her nowhere.

After launching her campaign, she apologized to the LGBTQ community for her connections to a hate group and religious right activism. After the campaign ended, she spent her last days in Congress introducing legislation to ban trans women from sports. She has since, of course, joined Fox News as a political pundit – one more reason to not watch the network.

The Republican closet case had to resign from Congress in disgrace over accusations of campaign finance fraud. He got caught gallivanting around Coachella with a bunch of gay friends and making out with other men, but somehow was shocked when people called him out for his record of voting against his own community during his six years in Washington.

He later came out as gay, but made all sorts of excuses for his previous behavior and never uttered the words “I’m sorry.” Meanwhile, reports have come out that he attended a fundraiser for President Trump in Beverly Hills last year.

Schock didn’t apologize because he’s not sorry; as I wrote in an op-ed last year, “Schock hasn’t changed. He’s still the same self-serving, self-loathing, shameless fool he was before, and we shouldn’t stand for it.”

The freshman Republican Congressman many have referred to as “the next Aaron Schock” due to his youth and good looks has developed a bit of a fanbase among the gay male community that needs to be immediately called out and shut down.

However handsome he may be, this is a guy who is not only vehemently anti-LGBTQ in his political positions but vocally racist and fascist. A few years ago he posed for a photo smiling at Hitler’s retreat in Germany and referred to him in the caption as the “Führer.” Just the other day made a joke about the Holocaust to sell campaign merchandise.

As someone who is being promoted by Republicans and the MAGA movement as a future rising star, we need to do everything we can to push back and prevent this dangerous Nazi sympathizer from gaining further success in politics; having gay men who sexualize him and ignore the worst parts of him and his record are not helping in that effort.