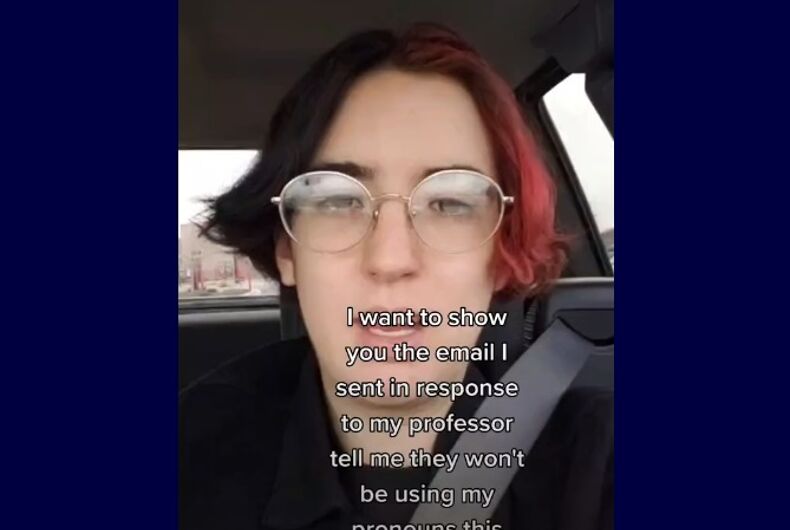 Shade's video about their professor refusing to use their correct pronouns went viral.Photo: Screenshot/TikTok

A video of a non-binary student responding to their professor’s refusal to use their correct pronouns exploded on TikTok, and it’s easy to see why.

Shade emailed their professors at the College of Southern Idaho (CSI) earlier this month to inform them that they are non-binary, go by a name that’s different than the one on their official documents, and use “they” pronouns.

One professor responded by saying that she would use Shade’s name but that she couldn’t use they pronouns because of her “convictions.”

So Shade shot back an informative email.

“I’m sorry, I think there was a misunderstanding here,” they wrote in an email they later read on the TikTok video that went viral. “You seem to think I’m making some kind of request? I was just informing you of my correct name and pronouns so you know how to refer to me.”

“Intentionally misgendering a student is actively creating a hostile environment and discriminating on the basis of gender identity. That goes against the school’s nondiscrimination statement. I know you wouldn’t want to do that.”

“I’m sure you understand that I expect to be treated with at least basic levels of respect and human decency in the classroom. I look forward to meeting you in class next week and working with you through the semester. Regards, Shade (they/them)”

I’m not putting up with it. #theythem #nonbinary #trans #lgbt #pronounsmatter

The video has been viewed 1.8 million times, far more than other videos Shade has uploaded to the social media platform.

In a later video, they said that the school’s Gay-Straight Alliance (GSA) isn’t helping them because the group’s advisor expected them to be “nice.”

Shade told local NBC affiliate KPVI-6 that the response to their videos has been “crazy.”

“My phone has calmed down a bit now, but the first few days, it was nonstop notifications.”

“At one point, somebody commented saying that they had watched a bunch of my videos and that they had been helpful because they’re about to adopt a trans daughter,” they said. “I almost cried. That is so sweet.”

Shade said that Dean of Students Jason Ostrowski has been helpful.

“We talked about trainings and culture shifts needed at CSI,” they said.

CSI said that they do not discuss personnel issues but issued a statement saying that students have options to report this kind of incident.

Meanwhile, Shade says that they are fighting so that other non-binary and trans students won’t have to go through the same thing.

“I’m less concerned with what happens between this individual teacher and myself and more concerned with what happens school-wide,” they said. “Because personally, I have support. I’m not somebody who is going to be super broken up about it, but I know that’s not the case for a lot of trans students. In fact, for a lot of trans students, it might be that school is the only place where they could possibly get gendered correctly.”